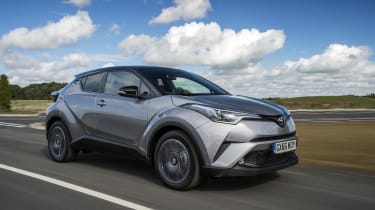 The new Toyota C-HR is now on sale in the UK, with prices starting from £20,995. The Nissan Qashqai, SEAT Ateca and Honda CR-V competitor is available with three trim levels, two engines and front or four-wheel drive. Unlike many rivals, however, there’s no diesel option, but Toyota’s continued investment in hybrid technology should ensure those after maximum efficiency are catered for.

We first saw the C-HR (coupe high rider) at the Paris Motor Show in 2016, where its concept car-esque looks impressed attendees and marked a sharp departure for Toyota’s design team – particularly compared to the conservatively styled Toyota RAV4 SUV.

The new Toyota C-HR is aimed at buyers seeking the high driving position and imposing stance of an SUV together with the low running costs of a hatchback. It shares many mechanical components with the Toyota Prius and is available with that car’s 1.8-litre petrol-electric hybrid setup or a more affordable 1.2-litre turbocharged petrol engine. UK customers can choose from three trim levels, with Icon being the cheapest. 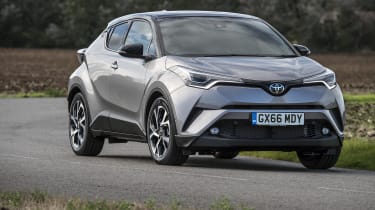 Viewed from the front, the new Toyota C-HR looks like a cross between a modern Lexus and the Toyota RAV4. High front wings, pronounced air intakes and swooping LED lights, which run half the length of the bonnet, contribute what Toyota calls its “expressive visual signature”, while at the rear a roof-mounted spoiler and the sculpted boot compete for aesthetic attention. The sharply tapered rear windows and hidden back door handles justify – at least in part – the coupe aspect of the C-HR’s name.

Inside, the new C-HR comes with Toyota’s tried-and-tested Touch 2 infotainment system as standard. This comprises an eight-inch touchscreen that sits proudly atop the dashboard to free up space lower down, and is angled towards the driver for a commanding and enveloping ambiance. 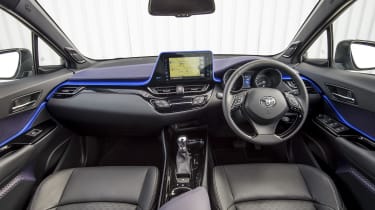 Considerable attention has been paid to material quality, reflecting Toyota’s intent to pitch the new car against upmarket rivals. Blue dials and lighting, together with piano-black trim inserts, lend the C-HR a modern ambience inside, while customers can choose from grey, black-on-blue or black-on-brown interior colour schemes.

All C-HRs will come with Toyota’s ‘Safety Sense’ package, which includes a lane-departure warning system with steering control, road-sign recognition, adaptive cruise control and a pre-collision system with pedestrian warning.

Because it's based on the same TNGA platform as the latest Toyota Prius hatchback, it's no surprise that the C-HR benefits from Toyota's latest hybrid technology.

The most efficient hybrid model will use a developed version of the Prius' 1.8-litre petrol engine and electric motor combination, driving the front wheels, returning 74.3mpg and emitting just 86g/km of CO2. 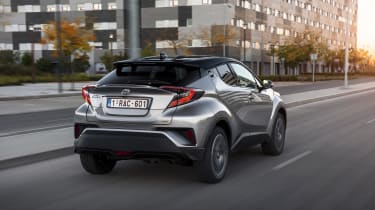 Toyota tells us that the C-HR’s chassis has been tuned specifically to suit European driving habits, with minimised body lean, a smooth ride and well weighted, accurate steering to maximise driving enjoyment.

You can read our full review of the Toyota C-HR by clicking here.