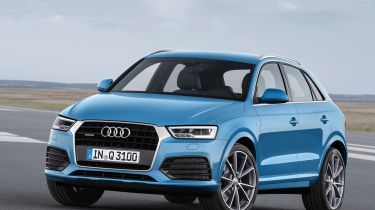 Audi has revealed details of the facelifted Audi Q3, which goes on sale later this month, priced from £25,340. The new version has refreshed styling, a reworked engine range and extra standard equipment. The flagship RS Q3 has also been given a 30bhp power boost and goes on sale in January.

The new look comes courtesy of a 3D-effect single-frame grille, which mirrors the one on the new Audi TT. The Q3 also features new bumpers and revised alloy wheels, while SE models now have a full body-colour paint finish – something which was previously standard only on S line cars and above. 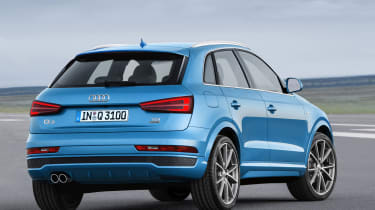 The redesigned headlights in SE models have powerful Xenon bulbs and bright LED daytime running lights at the front, while rear lighting comes in the form of new-look LEDs. S line and S line Plus models have full-LED headlights and what Audi calls 'dynamic scrolling rear indicators' – segments of which illuminate sequentially in two-tenths-of-a-second bursts to make it even clearer what direction the driver intends to turn.

The entire engine range has been reworked, with CO2 emissions reduced by up to 17% as a result.

The 1.4-litre petrol engine is the most interesting of the revised engines. Its cylinder-on-demand technology effectively 'rests' half of the engine whenever full power is not needed – such as when you're cruising on a dual-carriageway. It then seamlessly re-engages when extra power is required.

This system is already available in the Audi A1 and Audi A3, and it helps the Q3 return impressive fuel economy of 50.4mpg. The 1.4-litre petrol engine is only available with front-wheel drive and gets the Q3 from 0-62mph in 8.9 seconds when paired with Audi's S tronic automatic gearbox. A six-speed manual gearbox is also available.

The old 2.0-litre petrol engine is the next model up and its power has been boosted from 175 to 178bhp. It can be specified with a manual or automatic gearbox, but comes exclusively with four-wheel drive. 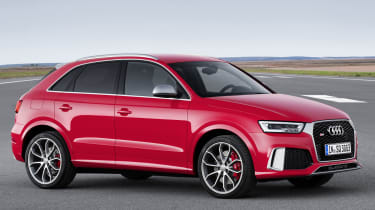 Sitting at the top of the range is the 2.5-litre RS Q3 performance model, which now produces 335bhp instead of the old car's 306bhp. That's enough of an increase to drop its 0-62mph time from 5.2 to 4.8 seconds. Fuel economy of 32.8mpg means this is also the most expensive Q3 to run, and it's also only available with four-wheel drive.

Two 2.0-litre diesels complete the engine line-up. Audi has boosted power in the basic diesel from 138bhp to 148bhp, while the old 175bhp diesel now offers 182bhp. Fit the basic model with 17-inch alloy wheels and it'll return 61.4mpg, while a drop in CO2 emissions means road tax has been reduced by £80, to just £30 a year. This model can be fitted with four-wheel drive (to the detriment of fuel economy) as an option, while the 182bhp model is only available with four-wheel drive.

Audi's 'Drive Select' system now comes as standard across the range. It allows you to choose from five driving modes: Comfort, Auto, Dynamic, Efficiency and Individual. 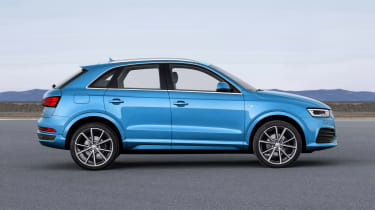 The base model benefits from extra kit including dual-zone climate control, a premium stereo system with a 6.5-inch screen, Bluetooth phone connectivity, an iPod connection, plus automatic lights and wipers. The new car also allows you to retrofit sat nav simply by purchasing an SD card. 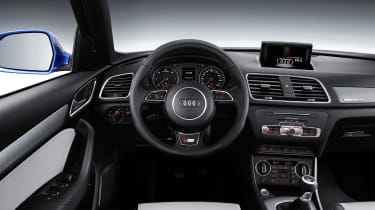 Customers can choose from a wide variety of additional safety features, including a blind-spot warning system, lane-keep assistance and a traffic-sign recognition system that displays roadside information on the dashboard.

The first new Q3s are expected to reach their UK owners in spring 2015, while the full specification list for the Audi RS Q3 will be confirmed in January. The first example of this model will be delivered at the same time as the rest of the range.