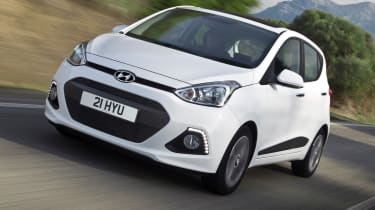 Hyundai has announced the introduction of a new range-topping trim level for the i10 city car called Premium SE.

The Premium SE model of the i10 sits above the existing Premium model and adds 15-inch alloy wheels, an electric sunroof, rear parking sensors, a smart key, chrome-effect door handles and climate control, plus heated front seats and steering wheel.

Tony Whitehorn, president and CEO of Hyundai Motor UK, said: "Since its launch a year ago, we've already sold over 25,000 [i10s] in the UK. The introduction of Premium SE will look to build on this success by providing customers with competitive levels of technology, without the need to compromise on the small-car package."

The Premium SE version of the i10 brings the total number of trim levels available to six. The most basic model is the S, followed by S Air, which adds air-conditioning, then SE and SE Blue Drive (a model designed to be the most economical), followed by Premium and finally the new top-of-the-range Premium SE.

Hyundai has also announced that all i10 models in SE trim or above will now get a space-saver spare tyre as standard.

Buyers of the SE model will also be able to choose the Connectivity Pack, which comprises Bluetooth with voice recognition, steering wheel stereo controls and rear speakers, for £175. The pack is standard on Premium and Premium SE cars, but due to demand, Hyundai has made it an option on SE-spec cars, too.

For more information on the new Hyundai i10, take a look at Carbuyer’s comprehensive review.