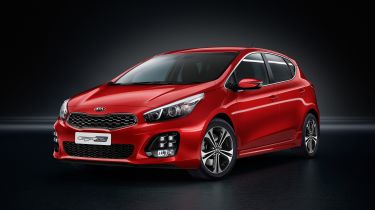 Kia has announced that a new Kia Cee'd GT Line specification will come to the UK at the end of this year. It'll be available on all Cee'd body types – the five-door, the three-door Pro_cee'd and the Cee'd Sportswagon estate – and feature a new engine and automatic gearbox.

The GT Line's automatic gearbox is new, too – it's a seven-speed dual-clutch transmission, which the company says will offer better performance and fuel consumption than the gearbox currently fitted to the Cee'd, making a 3-5% improvement to the 0-62mph time and a 5-7% improvement to fuel economy. 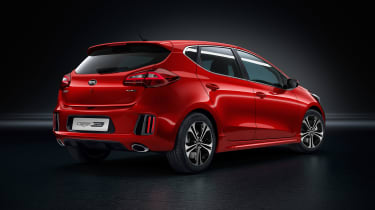 The Kia Cee'd and Pro_cee'd are already handsome cars, with strong lines and stylish features. The Cee'd is cheaper than its main rivals, the Volkswagen Golf and Ford Focus, but looks just as good – if not better – than both.

The GT Line specification adds several aesthetic improvements to the Cee’d. On the outside, Kia has fitted LED daytime running lights to the front and twin exhausts to the rear. Inside the car, updated upholstery and the GT Line logo throughout the cabin make this model slightly more distinctive. An aluminium stop-stop button adds to the sporty feel.

The Cee'd GT Line will make an attractive option for buyers when it reaches the UK towards the end of 2015.