"The Kia Pro_cee’d GT is a comfortable and practical hatchback, although it’s not as powerful or economical as its direct rivals" 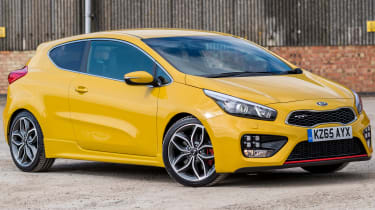 The Kia Pro_cee’d GT is a performance-orientated version of the standard three-door Pro_cee’d hatchback, pitched squarely at the Volkswagen Golf GTI and Ford Focus ST. It’s only available in one (very well equipped) trim level, but it’s more expensive than the faster Focus ST, while the Golf GTI is also quicker and remains a far more desirable car.

Still, as Kia’s first hot hatchback, the Pro_cee’d GT is a qualified success. Sports suspension makes it more enjoyable on twisty backroads than the standard Pro_cee’d, yet also does good job of isolating you from poor road surfaces and potholes. Although it’s only available as a three-door model (though the five-door Kia Cee’d GT is mechanically similar), this is also a pretty practical car, thanks to a decent-sized boot and large doors that make access to the back seats easy. The Pro_cee’d GT also benefits from Kia’s class-leading seven-year warranty, while the Kia Cee'd on which it's based finished 5th out of the 75 cars ranked in our 2017 Driver Power owner satisfaction survey of cars currently on sale in the UK

The Pro_cee’d GT isn’t as efficient as its rivals

While using a smaller engine fitted with turbochargers tends to offer an impressive blend of performance and economy and the Pro_cee’d GT’s turbocharged 1.6-litre produces a reasonable 201bhp, its fuel economy of 38.2mpg and CO2 emissions of 170g/km are less impressive.

The Volkswagen Golf GTI, for example, is more powerful than the Pro_cee’d GT, yet returns almost 10mpg better economy. The Pro_cee’d GT also sits in the same insurance group as the Golf GTI, despite being a slower and less powerful car.

On a more positive note, Kia’s Care-3 programme means you can buy three years’ servicing for a fixed price of £399, while five years’ cover comes in at £749. Both plans are likely to save you money compared to standard servicing costs.

201bhp would once have seemed like a huge amount of power for a hot hatchback, but as cars have got heavier over the years (partly due to extra safety equipment), they now need more power than before to deliver similar performance, so 201bhp seems average today. 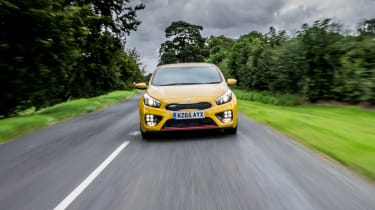 It’s a similar story with performance. The Pro_cee’d GT goes from 0-62mph in 7.3 seconds and on to a top speed of 143mph – impressive figures in isolation, but underwhelming in context: both the Ford Focus ST and Volkswagen Golf GTI go from 0-62mph in just 6.5 seconds. It might seem churlish to pick on the Pro_cee’d GT for such a minimal difference in speed, but drivers who choose performance-orientated hatchbacks tend to care about such things and the Kia is simply not as quick as its direct rivals.

To give the Pro_cee’d GT its due, though, it’s an enjoyable and easy car to drive – even if the Golf GTI and Focus ST are ultimately even more fun. The steering is a little light, but it feels accurate and provides a good amount of feedback, letting you know how much grip the front wheels have. The Pro_cee’d GT’s suspension, meanwhile, offers a good mix of comfort over poor road surfaces and minimal body lean in corners. There’s also a GT button, which when pressed pipes a synthesised engine note into the car through the speakers. It’s a neat touch that may appeal to keen drivers, although we’d wonder how often people will actually use it.

The dashboard feels well built and has some nice sporty touches 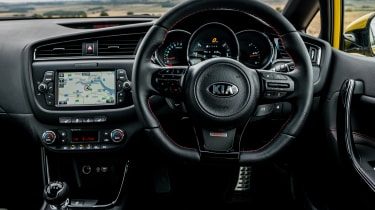 While the Pro_cee’d GT has largely the same dashboard as the standard Pro_cee’d, Kia has added some nice details to mark this performance version out. Half-leather sports seats by Recaro (which also makes seats for rally cars) together with red stitching on the steering wheel contribute to a sporty yet restrained air, while the digital dials include power and boost graphs, which have a certain novelty factor. Those Recaro seats are quite hard, but they also have pronounced side bolsters to hold you securely and feel comfortable over long journeys.

While the Pro_cee’d GT’s dark roof lining and small rear windows might make backseat passengers feel cramped, there’s actually a good amount of head and legroom in the rear. Front-seat passengers also get plenty of space, while large doors and the ability to slide the front seats forwards at the push of button making getting in the back easy, even though this is a three-door car. Tight parking spaces can prove a challenge, however, as those doors have to open quite wide. If you regularly carry more than one passenger, you’re probably better off looking at the Kia Cee’d GT, which has five doors and is only about £500 more expensive than this three-door model. 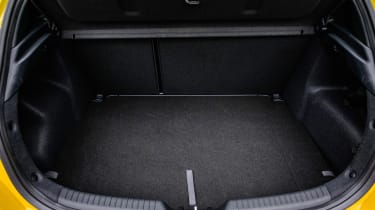 Pro_cee’d GT customers should have a worry-free ownership experience thanks to Kia’s seven-year/100,000-mile warranty.

More reassurance can be found in the Pro_cee'd's reputation for reliability. The standard Kia Cee'd on which it's based was rated highly for reliability in our 2017 Driver Power owner satisfaction survey of cars currently on sale in the UK. Of the owners who responded, 7.3% reported experiencing a problem with their car at least once.

Safety is also good, with the standard Cee’d scoring the full five stars in its Euro NCAP crash tests.

The Pro_cee’d GT has a lot of standard equipment

While the Pro_cee’d GT is slightly more expensive than the Ford Focus ST, the Kia has a far greater amount of standard equipment: a similarly specified Focus ST would be significantly pricier than the standard Pro_cee’d GT. It comes with heated part-leather sports seats, 18-inch alloy wheels, LED running lights, a full set of LCD dashboard dials, a seven-inch touchscreen sat nav (complete with DAB radio and Bluetooth phone connectivity), a reversing camera and a sporty bodykit. While a recent price increase means the Pro_cee’d GT isn’t quite the bargain it once was, it remains a safe, reliable and practical car with an excellent amount of standard equipment. 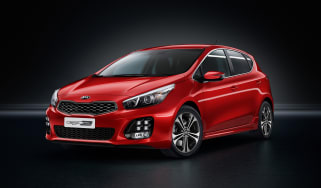