"The Kia Cee'd is a worthy addition to your shortlist if you need an attractive, practical and affordable family hatchback with a long warranty"

When the Kia name first appeared in the UK, it was on the nose of a budget supermini that appealed to buyers because it represented value for money more than anything else. So, the fact that Kia’s latest range includes genuine all-rounders like the Cee'd family hatchback shows just how far the South Korean brand has come.

Not only is the Cee'd more than able to hold its own against the Ford Focus, Volkswagen Golf, Vauxhall Astra, Peugeot 308 and Renault Megane, but it does so while having a visual identity of its own. The Kia Cee'd really is a car you might buy because you like it, not just for its attractive price and industry-leading seven-year warranty.

The Cee'd is available as this five-door hatchback, the Kia Pro_cee'd hatchback with three doors, and the Kia Cee'd Sportwagon estate, plus there's a sporty Kia Cee'd GT that we've reviewed separately. If you like the looks of that high-performance version but would prefer lower running costs, there are GT-Line and GT-Line S versions that look similar but have more economical engines. The rest of the range is made up of trim levels numbered simply 1 to 4.

Tthe Cee'd 1 is a well equipped car, featuring air-conditioning, DAB radio, USB and Bluetooth connectivity, but our favourite is the value-packed Cee'd 2. This model comes with a touchscreen entertainment system with sat nav, which provides mapping that's clear and easily understood, as well as Android Auto and Apple CarPlay connectivity. Cruise control, rear parking sensors and a parking camera make for a very user-friendly package. 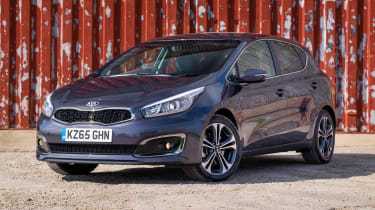 It's a shame that the Cee'd's interior can't quite match the contemporary look of its exterior styling. Although very logically laid out and modern, it's rather gloomy and unwelcoming. Better news is the way it's put together, which feels robust and is squeak and rattle-free on the move. The materials themselves are pleasant to the touch, with soft-feel surfaces used in prominent places.Buyers of the entry-level Cee'd 1 models can choose a 98bhp 1.4-litre petrol engine, but this is a little old fashioned and not especially economical. 2 models and up offer the more powerful 133bhp 1.6-litre petrol that promises 52.3mpg. The most interesting petrol engines is the 1.0 T-GDI – a 1.0-litre three cylinder producing 118bhp and returning 57.6mpg, but you can only choose it in GT-Line and GT-Line S models. The only diesel engine is the 1.6 CRDI that produces 134bhp and available with a choice of six-speed manual or seven speed automatic transmissions. 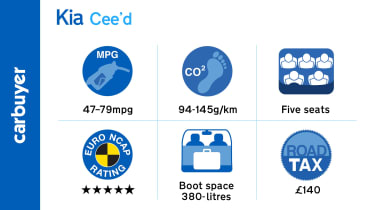 Those who crave more performance can opt for the GT, which is fast enough to bear comparison with the Renault Megane GT and Peugeot 308 GT, thanks to its 1.6-litre, 201bhp engine. This power comes at the expense of fuel economy, though, with the GT struggling to return more than 38mpg.

Kia has built up a strong reputation for making reliable cars, which shows in its confidence-inspiring seven-year/100,000-mile warranty. The Kia Cee'd finished 5th out of the 75 cars ranked in our 2017 Driver Power owner satisfaction survey of cars currently on sale in the UK.

There’s a clear emphasis on safety, too, with the Cee’d being awarded the full five stars after Euro NCAP crash-testing. As you’d expect, there’s a full complement of airbags, along with electronic stability control, tyre-pressure monitoring and anti-lock brakes.