In our 2018 Driver Power owners satisfaction survey, the Kia Ceed finished 61st overall out of 75 cars. 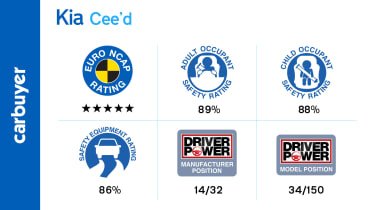 The Kia Cee'd was rated highly for reliability in our 2017 Driver Power owner satisfaction survey. Of the owners who responded, 7.3% reported experiencing a problem with their car at least once.

The Kia Cee’d earned a five-star Euro NCAP rating, although it had slightly lower percentage scores than the Hyundai i30, a car which shares many components with the Cee’d. The Kia features six airbags, two sets of ISOFIX child-seat mounts in the back, a passenger airbag deactivation switch so you can use a rear-facing child seat in the front, plus electronic stability control and braking assistance.

If you want Kia’s lane-departure warning system, then you need to go for the top-spec 4 Tech model, as that's the only model to get it, along with speed-limit detection.