The Kia Cee’d is a safe and secure hatchback that handles reasonably well, although it can’t match rivals for driving fun

Kia has come on in leaps and bounds in the last few years – and no car better demonstrates this progress than the Kia Cee’d. On the road, it’s composed and refined, while its light controls and good visibility make it a doddle to thread through crowded city streets.

Ultimately, the Cee’d isn’t as fun to drive as a Ford Focus or Mazda3, but it’s capable and composed and a huge improvement on the cars Kia was producing only a decade ago.

Another area of improvement is refinement. On the motorway, there’s very little wind noise, and even in diesel models the engine noise is no more than a background hum. So it’s a shame this is undermined by the Cee’d’s firm ride. Cheaper models with smaller wheels do a better job of soaking up bumps, but all versions thud over the worst of the UK's potholes and crash over sharp ridges. Things improve the faster you go, but a Volkswagen Golf will be more comfortable overall.

Whatever version you choose, you’ll benefit from the same sure-footed handling. Thanks to a sophisticated suspension set-up, the Kia Cee’d has plenty of grip, plus safe and predictable handling characteristics. On 2 models and above, you get Kia’s Flex Steer system, which lets you vary the weight of the steering to suit the road conditions and your mood. However, there’s little real difference to be felt between the Sport, Comfort and Normal settings. 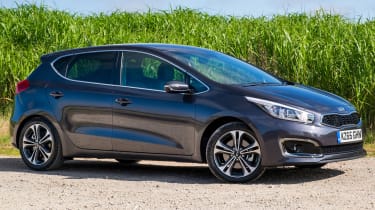 Nonetheless, the power steering is precise, if lacking in feel, while the brakes stop well without feeling too sudden. And while the manual gearbox is a little clunky, it’s generally nice to use.

The seven-speed dual-clutch gearbox is easy to use and fairly smooth, although it isn't as slick as the one found on the Volkswagen Golf or SEAT Leon. It can be fitted to the 1.0-litre turbocharged petrol engine or the more powerful 1.6-litre diesel.

Steer clear of the entry-level 98bhp 1.4-litre petrol. It’s smooth enough and willing to be worked hard, but it struggles to overcome the Kia’s weight and feels sluggish as a result. The 133bhp 1.6-litre petrol is faster, doing 0-62mph in 9.8 seconds. But you still need to rev it hard to get the best acceleration, which becomes a little tiring after a while. 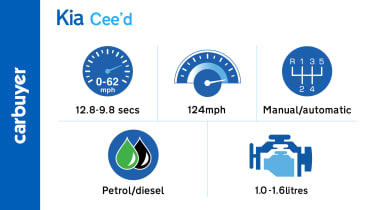 The 1.0-litre three-cylinder turbocharged petrol is our pick of the petrols. It comes with either 99 or 118bhp, taking 12.8 and 11.1 seconds respectively to do 0-62mph. That's pretty slow, but this engine is smooth and makes a characterful noise – not to mention being more economical than the other petrols.

One of the diesels will be a better bet for most drivers, especially if you have high annual mileage. The 1.4-litre CRDi feels eager enough, but the 1.6-litre diesel is our pick. It's available with 134bhp and takes 10.2 seconds to do 0-62mph. Yet the diesels' responsiveness is most relevant, as it gives the Cee’d more useable acceleration in real-world driving.