Convertible city car will go on sale in January, priced from £13,265 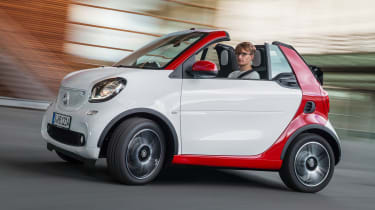 Full details, including prices, specs and the release dates have been revealed ahead of the car going on sale in the UK in early 2016. These come four months after the car's unveiling at the Frankfurt Motor Show in September.

Smart says the car is "three cars in one" because of its 'tritop' roof, which can be closed, partially opened as a large sliding canvas sunroof, or fully opened as a proper drop-top. The removable roof bars can be stored in the car's bootlid when the roof is completely retracted.

Overall changes to the look of the standard ForTwo are fairly minimal: the cabrio retains the same body shape and short overhangs, as well as the car's famed 'tridion' safety cell. The tritop fabric roof, which is slightly larger than the roof of the previous ForTwo cabrio, is available in blue denim, red or black and can be lowered automatically in 12 seconds, even while on the move. The cabrio will come with a three-button key that allows you to lower the roof from outside the car. 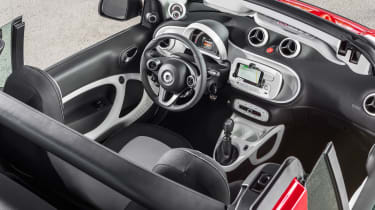 A problem frequently associated with removing the metal roof of a car to turn it into a convertible is a loss of rigidity. Smart has addressed this by improving the torsional strength of the ForTwo cabrio by 15% compared to its predecessor. This not only should this improve the car's handling but, combined with targeted reinforcing of the bodywork, it makes it safer too.

The ForTwo cabrio will be available with the same two engines as the hard-top, namely 71bhp 1.0-litre and 90bhp 0.9-litre petrol engines. The more powerful engine gets the car from 0-62mph in 10.8 seconds, while models with the 1.0-litre take 14.9 seconds. Both cars emit less than 100g/km of CO2 and so cost nothing to tax. This also means they'll be in the 13 or 14% bracket for Benefit-in-Kind (BiK) company car tax brackets.

The Passion, Prime and Proxy trim levels available to hardtop ForTwo buyers will be offered on the cabrio, as well as a range of optional safety and comfort equipment, including smartphone integration with MirrorLink, an Urban Style pack (black wheelarch linings and a lowering kit) and a wind deflector. This means you get Bluetooth phone connectivity,15-inch alloys and automatic climate control as standard. Prime models add a different design of alloy wheel, leather upholstery and extra instrument dials. Top-of-the-range Proxy models get luxuries like 16-inch alloys, leather-and-cloth 'sports' upholstery and suspension that's been lowered by 10mm. All cars come with a choice of a black or red (£115 extra) roof options.

You'll also be able to add a couple of option packs - Premium and Premium Plus packages. The Premium pack costs £795 and adds rear parking sensors, sat-nav and a comfort pack, which gives the seats, steering wheel and mirrors extra scope for adjustability. The Premium Plus package, which costs £1,295, includes LED front and rear lights, automatic wipers and lights and a rear-view camera. 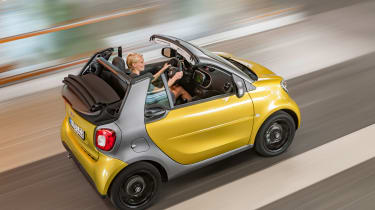 Pricing will start at £13,265 for a basic 71bhp version, rising to £15,550 for a 90bhp model in proxy trim with the automatic gearbox. For a full run down of the list prices, see the table below.