Gets 257mpg; Ioniq Hybrid and Ioniq Electric already on sale 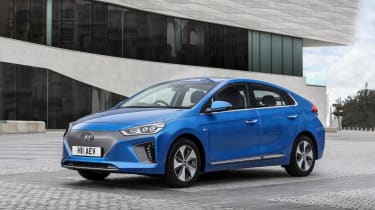 Full details of the Hyundai Ioniq Plug-In were announced at the Geneva Motor Show in March. The car is claimed to be capable of a stunning 257mpg and has CO2 emissions from just 26g/km. It arrives in UK showrooms in July 2017.

The Hyundai Ioniq is the first single model to be sold with the choice of a hybrid, plug-in hybrid or all-electric powertrain. The Hyundai Ioniq Hybrid (costing from £19,995) and Hyundai Ioniq Electric (from £24,495 after deducting the plug-in car grant) arrived first in late 2016, after getting their debut at last year’s Geneva Motor Show.

Fitted with a 1.6-litre petrol engine with 104bhp, a 60bhp electric motor and an 8.9kWh lithium-ion battery pack, the Ioniq Plug-In can drive for up to 39 miles on electric power alone – almost 10 miles further than the claimed range of the Toyota Prius Plug-In. The Toyota does boast slightly better efficiency figures of 283mpg and 22g/km of CO2, but it’s worth bearing in mind the Hyundai is likely to cost less. 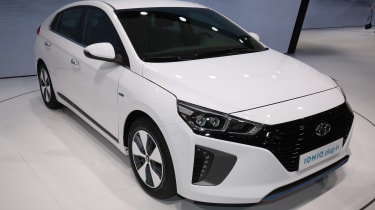 This is certainly true of the Ioniq Hybrid, which undercuts the equivalent Prius by around £4,000. While exact trim levels for the Plug-In aren’t known yet, it’s likely to stick close to the Hybrid and Electric, with SE, Premium and Premium SE the only three on offer.

Here, even the entry-level SE versions get features like a reversing camera, cruise control, Bluetooth, DAB digital radio and alloy wheels, while autonomous emergency braking boosts safety by helping to minimise or avoid collisions. Luxury kit like a heated steering wheel and heated or ventilated front seats makes it into the Premium SE trim and an eight-inch touchscreen with Apple CarPlay and Android Auto keeps smartphone users connected.

Soon there might even be an option to let the Ioniq drive itself, because an autonomous Ioniq concept also appeared on Hyundai’s Geneva show stand. With LiDAR hardware hidden in its bumpers, this is still very much a prototype, but test drives on the streets around Las Vegas have proved it can negotiate urban traffic and even roadworks – which aren’t easy to programme for.

If you don’t want to wait for the Plug-In model, or the autonomous Ioniq for that matter, the Ioniq Hybrid could be your best bet. It uses a small electric motor in a similar way to a turbo, boosting acceleration as you pull away or increase speed. This version doesn’t require any charging either, as the small battery is topped up with energy as you drive – particularly when slowing down.

You could argue that the Honda Insight, Toyota Prius and Hyundai Ioniq share a similar design and this is because their shape is largely dictated by needing to be as aerodynamic as possible. Despite this, the Ioniq is still recognisable as a Hyundai, thanks to its ‘family’ grille, swept-back headlights and LED daytime running lights.

The Ioniq is also around 60kg lighter than a regular family hatchback. This has largely been achieved by using aluminium for key parts of the car, instead of high-strength steel.

On the Ioniq Electric, there’s no radiator grille at all – with no conventional petrol or diesel engine, the need for a radiator is eliminated, in turn reducing the car’s wind resistance. Elsewhere, the car’s alloy wheels have been designed specifically to disturb air minimally as it passes under the car. All Ioniqs are fitted with front and rear lip spoilers to direct air as it flows around the car.

Compared to those in other Hyundai models, the Ioniq’s dashboard is somewhat simplified. The eight-inch infotainment touchscreen removes the need for several dashboard buttons and is the ‘nerve centre’ of the interior. It’s compatible with Android Auto and Apple CarPlay, allowing you to safely (and legally) control features on your smartphone while at the wheel. 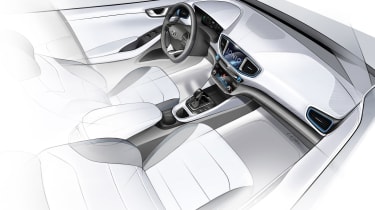 Plenty of head, shoulder and legroom is assured for all occupants and in keeping with the Ioniq’s green credentials, the materials used inside are ‘eco-friendly’. Boot space is claimed to be best-in-class, thanks to the batteries being placed under the rear seat instead of under the boot, as is typical of other hybrids. The Hybrid and Plug-In have 443 litres of boot space, while the Electric has 350. This eclipses the Toyota Prius by around 100 litres and can be expanded to 750 litres if you fold the rear seats flat.

The Ioniq range currently consists of Hybrid and Electric models, with different specification levels for each. You can choose the Hybrid in SE, Premium or Premium SE spec, with prices beginning at £19,995. Equipment on even this entry-level version is quite comprehensive, with 15-inch alloy wheels, Bluetooth, DAB radio and cruise control all coming as standard, as well as rear parking sensors and a reversing camera.

All models are protected by the impressive list of safety technology that’s fitted as standard – autonomous emergency braking is on hand to bring the car to a halt automatically if an emergency arises, lane-keeping assistance prevents you drifting out of your lane on the road and the air pressure in every tyre is individually monitored.

At the top of the Hybrid range, the £23,595 Premium SE expands the toy count still further, with 17-inch alloy wheels, automatic headlamps and wipers and leather seats that are heated and ventilated for those in the front – the driver enjoying electric adjustment with a memory function. Blind-spot monitoring is also a feature, along with rear cross-traffic alert that will warn of approaching traffic when you’re reversing out of a parking space. Front parking sensors are also fitted.

The specification is broadly similar for the Ioniq Electric, although there’s no SE model here – the Premium is the entry-level and starts at £28,995 before the government contribution is deducted. It features automatic wipers, 16-inch alloys, LED lights all around and adaptive cruise control in addition to the specification of the Hybrid Premium.

Top of the Ioniq Electric range is the Premium SE, which starts at £30,795 (again, before the government subsidy). Its kit is pretty much identical to what you get with the Hybrid Premium SE, apart from its unique 16-inch alloys and red exterior trim highlights.

The Ioniq is based on an all-new platform and uses a range of advanced lithium-ion batteries for greater electric-only range and performance than some rivals.

It’s constructed from a mixture of advanced high-strength steel and lightweight aluminium. The use of aluminium for non-structural bodywork makes the car lighter and more efficient, as well as better to drive. Hyundai has positioned the batteries low down to lower the centre of gravity and further improve the Ioniq’s handling.

The Ioniq is the first car to be available with a choice of hybrid, plug-in hybrid and fully electric power options.

The Ioniq Plug-In will have an all-electric range of up to 39 miles thanks to a 60bhp electric motor and 104bhp petrol engine providing slightly more power than the standard hybrid. Hyundai is expecting CO2 emissions for this version to be as low as 26g/km, with fuel economy of 257mpg. 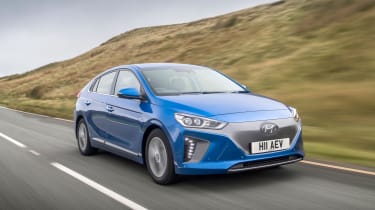 The Ioniq Electric’s 28kWh battery and 118bhp electric motor mean it’s capable of going to 174 miles on a charge (under perfect conditions) and reaching a 103mph top speed. The batteries can be charged from either a domestic socket or public charging point. Using a fast charger, they can be recharged up to 80% of their capacity in just 33 minutes. Using a POD Point (Hyundai's preferred charging partner), the Ioniq Electric can be charged from zero to 100% in 4.5 hours at home.

The Ioniq Electric is also eligible for the Government's Plug-In Car Grant, is exempt from the London Congestion Charge and remains road-tax-exempt under the new road-tax scheme introduced in April 2017.

The hybrid combines a specially designed 1.6-litre petrol engine and an electric motor producing 43bhp. Put these together and they produce a combined 139bhp, fed to the front wheels by a six-speed dual-clutch automatic gearbox. 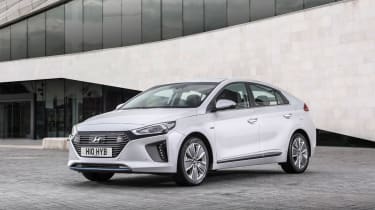 Hyundai says the Ioniq Hybrid returns up to 83.1mpg. That’s less than the 85.6 or 94.2mpg promised by the Toyota Prius, but still sufficient to cover 846 miles (enough to drive from Land's End to John O'Groats) without refuelling. CO2 emissions for the hybrid are rated at 79g/km, which means it is liable for the London Congestion Charge.

Pricing for the Ioniq Hybrid starts at £19,995 – significantly less than the rival Toyota Prius, which is priced from £24,100. The Premium and Premium SE trim levels cost £21,795 and £23,595 respectively, while the Ioniq Plug-In starts at £24,995 and a 7kW home charger is £300, including installation. The Ioniq is covered by Hyundai's five-year/unlimited-mileage warranty and there’s additional battery cover up to eight years or 125,000 miles.