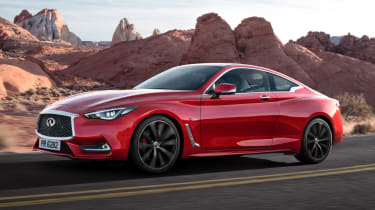 Full prices and specifications for the new Infiniti Q60 coupe have been announced ahead of the car’s appearance at this week’s Paris Motor Show. The car made its public debut at March’s Geneva Motor Show, but is now finally going on sale.

It’ll be available in four different trim levels – Premium, Premium Tech, S Sport and S Sport Tech. The first two are offered with a 208bhp turbocharged four-cylinder petrol engine only, while the second two are also available with a 400bhp twin-turbocharged petrol V6 and four-wheel drive. The less powerful models are rear-wheel-drive only, while both versions come with a seven-speed automatic gearbox. 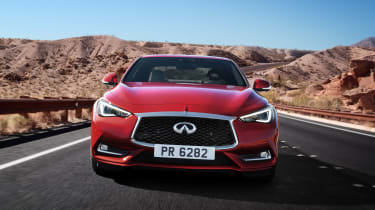 When the Q60 arrives towards the end of 2016, it’ll be up against some pretty stiff competition. A new Audi A5 has just been launched, while the BMW 4 Series has only recently been updated. There’s also the new Mercedes C-Class Coupe to take into account, as well as the Lexus RC.

The lack of a diesel option could well limit the Q60’s appeal with company-car drivers, although a frugal hybrid version is on the cards.

There’s no denying the Infiniti Q60 is a striking looking thing, with taut, heavily creased bodywork, angular detailing and Infiniti’s signature ‘double arch’ mesh grille. Recessed slightly into the body, the grille is trimmed in chrome and features the Infiniti badge right at the centre. 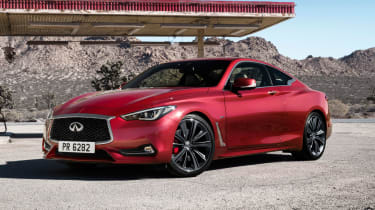 You get LED lights all the way round, housed in slender light clusters at the front with strong daytime running light graphics. These also feature ‘Light Guide Technology’, which ensures the light from the LEDs is evenly spread across the road ahead of you.

Despite the fact that the Q60 is based on the same mechanical underpinnings as the Q50 saloon, you’ll notice they look significantly different, thanks to the coupe’s much lower roofline, strong creases in the bodywork, new light clusters and sportier stance. 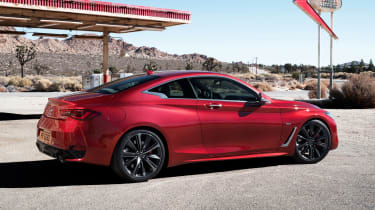 Not only was the bodywork designed with aesthetics in mind, it was also sculpted for better aerodynamics. According to Infiniti, the Q60 has a very low drag co-efficient, which allows it to slip through the air more easily, improving both performance and fuel efficiency.

All models come with 19-inch alloys as standard, while 20-inch wheels are optional.

Inside, the Q60’s design is very similar to that of the Q50 saloon. The dials, infotainment system and display are all identical, as are the steering wheel and switchgear. The only differences between the two, says Infiniti, are some new trim pieces and contrasting stitching. 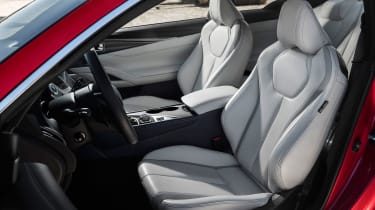 What is new, however, is a 13-speaker Bose stereo, which also features active noise cancellation – a system that emits certain frequencies through the speakers to cancel out any exterior noise (especially from the engine) to improve refinement. Couple with the car’s special acoustic glass, Infiniti claims this will make the Q60 one of the quietest cars in its class. 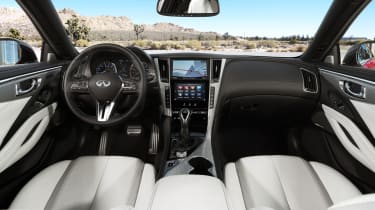 If you don’t want to sit back and enjoy the silence, however, Infiniti also says that the acoustic environment of the Q60 is perfect for listening to music.

Buyers will also get Infiniti’s ergonomically shaped seats, which give more support to your spine than a standard seat while also spreading your weight more evenly, making them even more comfortable.

Move up to Premium Tech and you get power adjustment for the steering column, the aforementioned 13-speaker Bose stereo, adaptive cruise control, upgraded sat nav and the Visibility Pack. This includes a 360-degree camera system, as well as parking guidance and moving object detection. 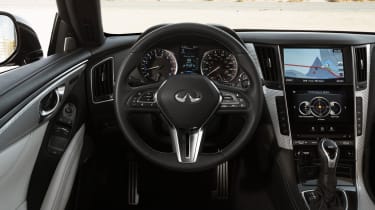 Next up, the S Sport model gets shift paddles for the automatic gearbox, 19-inch dark chrome alloy wheels, carbon-fibre interior trim and aluminium pedals. There’s also a memory function for the seats and steering wheel. Both this and the top-spec S Sport Tech model, meanwhile, get sporty additions like Direct Adaptive Steering (more on this below), while Q60s with the most powerful engines get Infiniti’s Dynamic Digital suspension. The S Sport Tech also comes with an Eco pedal if you specify the 400bhp twin-turbo V6 engine.

For now, there are only details of two turbocharged petrol engines for the Q60. There’s a twin-turbocharged 3.0-litre V6 that manages an impressive 400bhp and a single-turbo 2.0-litre four-cylinder that makes 208bhp. At present, there’s no fuel economy or CO2 emissions information for either, but we do know that they send their power to the wheels through a seven-speed automatic gearbox. 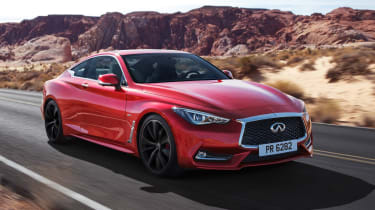 Sport models and above will also be fitted with Infiniti’s Direct Adaptive Steering system. This uses electronics rather than a traditional steering column to transmit your steering input to the front wheels. Infiniti claims it’s been significantly redeveloped for greater feel and a more natural response to driver inputs than previous versions.

Q60s fitted with the twin-turbo V6 will also feature all-new electronically controlled suspension. This promises to greatly improve the car’s handling, agility and ride comfort, especially in conjunction with a new drive mode selector, which gives you a choice of Standard, Sport and Sport+ modes and then three different ‘response’ modes (Default, Dynamic and Dynamic+), which determines the level of assistance given in each mode.

The Q60 comes with many active safety systems. These include adaptive cruise control, which keeps the car a set distance from the vehicle in front on the motorway. There’s also a system to stop the car automatically if it detects an imminent collision, a lane-departure prevention system and technology that alerts you if there’s something in your blind spot.