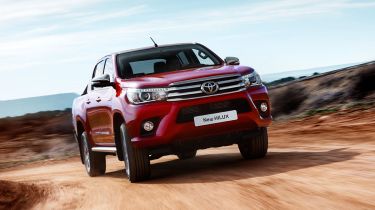 Toyota has released full details of the new Toyota Hilux, which is available to order now. Hot on the heels of several new pick-up trucks, including the Ford Ranger, Nissan Navara and Mitsubishi L200, the Hilux gets a 148bhp 2.4-litre diesel engine and a starting price of £19,177 excluding VAT.

The new Hilux is longer, wider and lower than the outgoing model, meaning there’s more internal space and a bigger cargo bay than before. The truck’s towing capacity has been improved to 3.5 tonnes, too.

Toyota designers have freshened up the truck’s look with sleeker lines, LED daytime running lights and some new 17 and 18-inch alloy wheel designs. The Hilux is available in single-cab, extra-cab or double-cab form, and colours offered include White Pearl, Nebula Blue, Crimson Spark and Avantgarde Bronze.

The new 2.4-litre turbodiesel engine produces 148bhp and Toyota says it offers significantly improved power delivery and efficiency. Fuel economy promises to be around 40mpg, depending on the exact model, with CO2 emissions coming in at around 187g/km.

All UK versions of the Hilux have four-wheel drive and a six-speed manual gearbox as standard. Top-spec models are offered with the option of an automatic gearbox, which cuts the 0-62mph time from 13.2 seconds for the manual to 12.8 seconds. 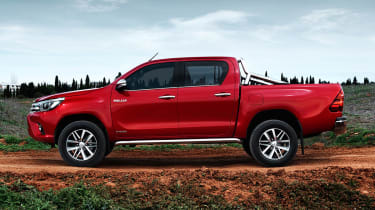 Toyota says the Hilux is now stiffer than before, which should improve handling, ride comfort, refinement and safety. The truck will come fitted with various systems to help it perform off-road, including different settings for the four-wheel-drive system, as well as locking limited-slip differentials on certain models to improve grip.

Inside the Hilux, Toyota has tried to combine the durability of a truck with the appeal of an SUV. Moving up from the entry-level trim gets you a seven-inch touchscreen, used to control the Toyota Touch 2 infotainment system.

Four trim levels are available, beginning with entry-level Active and moving up through Icon and Invincible specification to the top-spec Invincible X. Single and extra-cab models are only available in Active form, and this trim features Bluetooth, two airbags, hill-start assistance, heated mirrors and air-conditioning.

Toyota Safety Sense is available as an option on the Active and Icon models and comes as standard on the Invincible and Invincible X. It includes several safety and driver-assistance features, including a pre-collision system, lane-departure warning, auto-dipping headlights and road-sign recognition. All Hilux models feature traction control, hill-descent control and hill-start assistance as standard.

The new Toyota Hilux is available to order now, with first deliveries scheduled for July. Prices excusive of VAT start at £19,177 for the single-cab model in Active trim, while a double-cab Invincible X model with an automatic gearbox tops the range at £29,435. All come with a five-year/100,000-mile warranty.