Latest version of Suzuki supermini on sale in June 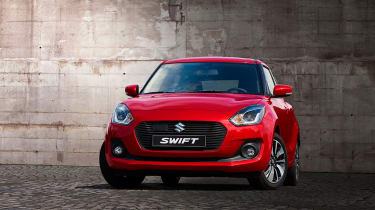 If you’re in the market for a fun little hatchback, another choice has come your way. The new Suzuki Swift will be priced from £10,999; at least £1,600 cheaper than the most basic Mazda2 or Ford Fiesta.

It bears a strong resemblance to the current car, but with sportier looks. Although the Swift shares its underpinnings with the larger Suzuki Baleno, it promises a greater emphasis on driver appeal.

Suzuki’s UK sales and marketing director Dale Wyatt said: “lightness and a fun drive will be the focus. Having the practical Baleno allows us to look at the dynamics of the Swift.”

Because it weighs just 890kg, the entry-level SZ3 model comes with a 1.2-litre petrol engine producing 90bhp and a very respectable 65.7mpg. A 1.0-litre turbocharged petrol engine is also available with either an automatic or a manual gearbox. Go for that and you’ll have a nippy 109bhp at your disposal.

The SZ3 is the cheapest model, but that doesn’t mean you have to make do with a sparse equipment list. LED daytime running lights, air-conditioning and DAB digital radio are all standard, as are 15-inch alloy wheels, rear privacy glass and Bluetooth connectivity. It’s worth mentioning that you can no longer buy a new Swift for under £10,000, like you could with the previous generation.

Specifying an automatic gearbox (only available on the 1.0-litre petrol SZ5) is the most expensive way into Swift ownership, costing £15,849, while you can get a four-wheel-drive mild hybrid (with a manual gearbox) for £15,499.

The new Suzuki Swift is on sale now – read our review here.

The new Suzuki Swift may look similar to before, but is actually all new and 15mm lower, 40mm wider and 10mm shorter than the previous model. This lends it a lower, sleeker look, while retaining its familiar identity.

Although it shares a platform with the Baleno, the Swift will be allowed its own fun-loving persona – enthusiastic drivers often praise the outgoing Swift for its enjoyable handling.

The new platform also contributes to a 120kg weight saving over the current car, while its increased stiffness should improve crash safety. Despite being 10mm shorter than the previous model, a 20mm increase in wheelbase (the distance between front and rear axles) is said to have improved interior space. Boot space is also increased to 254 litres, which is 54 litres more than before. 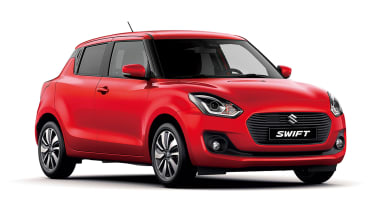 While the overall look may be familiar, there are many new details that catch the eye. Blacked-out pillars all-round lend a ‘floating roof’ effect, while rear door handles are concealed in the darkened area of the C-pillar, for a coupe-like appearance.

The pronounced character line that runs along the lower part of the doors is retained, but now runs into the rear wheelarches. The new car also has pronounced shoulders, with sharp edges running from the headlights and fading into the front door, before emerging on the back door to run into the rear lights.

At the front, a six-sided sports-car-style grille is more distinctive than that of the old car, while a lower grille wraps under and incorporates fog or daytime running lights. Higher trim levels will be identified by LED signature illumination in the headlamps and rear lights. 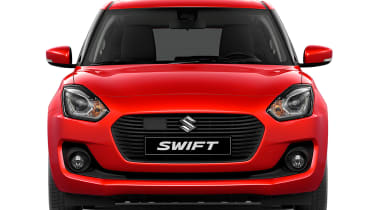 Inside, the new Suzuki Swift makes the most of its enlarged exterior dimensions, with more space for those in the back, including 23mm more headroom – despite the car being lower than before. The new Swift’s increased width allows the front seats to be spaced wider apart, increasing comfort for both front occupants. 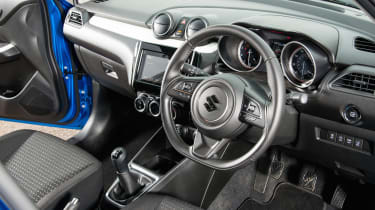 The Boosterjet engine will also be available as part of an SHVS ‘mild hybrid’ system, where the starter motor can also act as a generator, allowing the battery to be charged by regenerative braking. This is claimed to bring CO2 emissions down to 97g/km, while only adding 6kg to the weight of the car.

A four-wheel-drive option will be available on the 1.2-litre SZ5, using Suzuki’s ALLGRIP system, which automatically send power to the rear wheels when necessary.

Already on sale in Japan, the Swift will be available in the UK from 1 June. As mentioned above, it’ll start from £10,999, rising to £15,849 for the most expensive version.