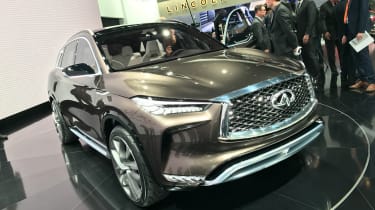 The car you’re looking at here isn’t the new Infiniti QX50 – officially, at least. This mid-size premium SUV is, says the luxury arm of Nissan, a concept – but a concept that looks as close to production as it’s possible to get.

Unveiled a January's Detroit Motor Show, the potential Audi Q5, BMW X3 and Range Rover Evoque rival has a bonnet Infiniti says is inspired by the “rise of a snake’s head” and interior materials that have been carefully chosen to showcase the best in Japanese design. 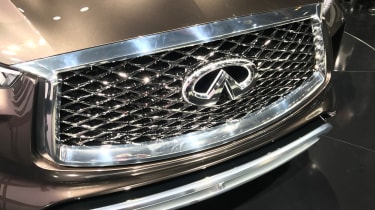 The QX50 Concept is being presented with Infiniti’s latest autonomous driving technology, which is intended to act as a co-pilot for the driver. This system – or rather this host of systems – uses lasers, radars and cameras to scan the road, alerting the driver to potential hazards and allowing “the car to react accordingly”.

Care has been paid to the QX50 Concept‘s interior, with soft-touch plastics, high-gloss woods and “fine attention to detail” being the order of the day. Infiniti has embraced the Japanese approaches of ‘shitate’ and ‘mitate’ – which together focus on selecting the finest materials and curating them together in a harmonious and cohesive design. 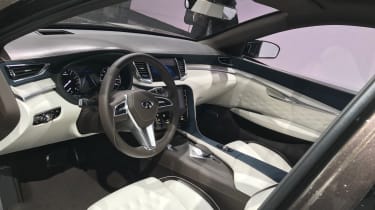 The company says these philosophical approaches have allowed it to create a “driver-centric” yet “passenger-minded” interior. Although these ideas might sound contradictory, they’re best evidenced in the infotainment screen, which has been designed to allow all occupants a view of the car’s autonomous status. This “human machine interface” (HMI) is intended to promote a cohesive relationship between the QX50 Concept and its occupants.

Infiniti has enjoyed significant success in North America and it’s hoped the QX50 Concept – and the car it ultimately foreshadows – will help the company replicate its accomplishments this side of the Atlantic.

A strong corporate image is all-important for premium brands and the teaser sketches that Infiniti has released show the marque knows this well.

We recognise Infiniti’s current design language in the QX50 and immediately notice a strong resemblance to the recent Infiniti Q60 coupe's front grille treatment. The QX50 has headlamps that blend into a character line running most of the length of the car, which has muscular haunches over all four wheelarches for a powerful look.

Although this final, less radical image of the QX50 show car is rather less dramatic than the teaser sketches, many of the same design features are apparent, including the aggressive intakes either side of the front grille and the strong line that runs from the front headlamp to the rear side doors. Meanwhile, the flanks of the car are still heavily sculpted, but considerably toned-down in comparison to the sketches. 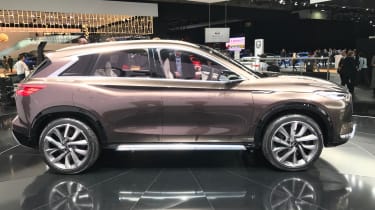 The glass areas of the show car look to be far more representative of a production model than those seen in the teaser sketch; it’s unlikely that such a shallow windscreen could possibly make it to production. No interior images have yet been published, but Infiniti describes it as "driver-centric, passenger-minded".

Infiniti is keen to emphasise that ProPILOT will "act as a 'co-pilot' for the driver, empowering rather than replacing them and 'delegate' more onerous driving tasks to the car". Examples of where the car will assist are in dealing with stop-start motorway congestion and keeping track of the positions of other vehicles immediately surrounding the car.

The QX50 Concept will also preview Infiniti's VC-Turbo engine technology, which promises the power of a 2.0-litre turbocharged petrol engine allied to the pulling power and fuel economy of a modern diesel.

This is made possible by employing a variable compression ratio; a factor that can't usually be adjusted from an engine's design parameters. This is essentially a complete rethink of how a petrol engine works, and Infiniti's engineers have aimed for a 27% increase in efficiency over a similarly powerful V6 petrol engine.

The presence of VC-Turbo technology in the QX50 concept previews its appearance in the version that makes it to market – Infiniti states that this engine technology is production-ready.