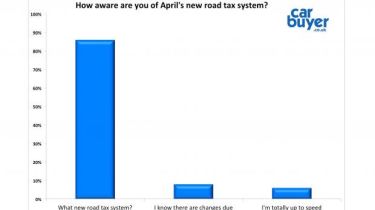 A new survey by Carbuyer has found consumers are largely unaware of the forthcoming road-tax changes, which will affect all new cars sold from April. They could see hundreds of pounds being added to motorists' annual tax bills.

Drivers of the lowest-emission petrol and diesel cars could be hit with a hike of £140 a year and those buying a car costing more than £40,000 will be forced to pay a £1,550 levy over the first five years of ownership. Yet the overwhelming majority of motorists don't know the changes are coming.

More than 4,000 people took part in our online poll, which asked readers how up to speed they were about the new regime. Just 6% were fully aware of it.

Under the current scheme, scores of different cars are exempt from road tax, or Vehicle Excise Duty (VED). That’s thanks to the fact they emit less than 100 grams per kilometre (g/km) of carbon dioxide (CO2).

For cars registered after April, though, only those that produce no CO2 at all – fully electric and hydrogen cars – will be spared road tax. All other models registered from then on will be liable for an annual road-tax bill of £140, regardless of CO2 emissions - though hyrbids get a £10 annual discount. While the first year of road tax will still be based on CO2 emissions and will range from £10 to £2,000, this fee is almost always absorbed in a car’s on-the-road price – meaning it isn’t usually seen as a running cost by consumers.

However, cars with a list price of more than £40,000 will also incur an additional £310 levy the first every time its road tax is due, bringing their total annual VED bill to £450 until the car reaches six years old..

Carbuyer editor Stuart Milne said: “While the changes should provide more reasons for cost-conscious buyers to choose a fully electric vehicle, they remove much of the incentive for buyers to choose low-emission models with a petrol or diesel engine. Remarkably, a 1.0-litre Vauxhall Corsa will attract the same tax bill as a 5.0-litre Ford Mustang once the first year of tax has been paid.

“Buyers should also be aware that the list price includes the cost of any options. Choose too many extras and you could unwittingly push your car’s price above £40,000 – that’ll cost you an additional £1,550 over five years.”

The changes will affect many different types of cars, from small city cars to large hybrid and electric SUVs

We contacted the Driver and Vehicle Licensing Agency for comment on our survey and a spokesman told us: “We want to help new car buyers understand the new tax rates coming into effect from 1 April for brand new cars...[a]nd we want to help those with cars registered before that date to understand that nothing changes for them. We have also set up a dedicated web page on GOV.UK for members of the public looking for more information on the new rates.”

Because petrol engines generally emit more CO2 than their diesel counterparts, buyers have been incentivised to buy diesels for some time. In turn, carmakers have focused on driving down the amount of CO2 these cars emit. Carbuyer understands the Treasury is now drawing less revenue than it expected to be when the outgoing rules were drawn up.

The new system is also being brought it because while diesel engines emit relatively little CO2, recent research indicates other emissions – including mono nitrogen oxides and particulate matter – are more harmful than was once thought. Petrol engines, while emitting more CO2, tend to be cleaner in this regard.

It’s not all bad news, though: drivers who want to drive a petrol car but may have been put off by high tax rates are likely to find their engine of choice becomes more affordable under the new system, as the playing field between diesel and petrol becomes more level. And it’ll provide another reason for buyers to consider an all-electric or hydrogen-powered car.

April’s new scheme won’t apply retrospectively, so whichever road-tax system was active when you registered your current car will continue to apply for as long as it’s on the road.

Do bear in mind that the new system will apply to any car registered on or after 1 April – regardless of whether it was ordered or paid for before then. That means if you’re about to order a new car, you’ll have to be quick if you want to take advantage of the exemption granted to some models under the current system. Carmakers typically take around 10-12 weeks to build a car once it’s been ordered, and delays aren’t unheard of.

If you’d like to read more on the subject, meanwhile, our guide to the new tax system has everything you need to know.