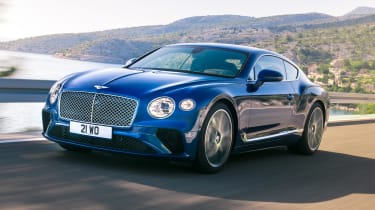 The new Continental GT features a 626bhp version of its predecessor’s 6.0-litre W12 twin-turbo engine, and takes just 3.7 seconds to go from 0-62mph and is capable of a 207mph top speed.

With a large wire-mesh radiator grille, four round front lights and a tapering silhouette, the new Continental GT is unmistakably a follow-up to Bentley’s best-selling car. There’s little likelihood of mistaking it for its predecessor, however – particularly when you see the new elliptical rear lights. 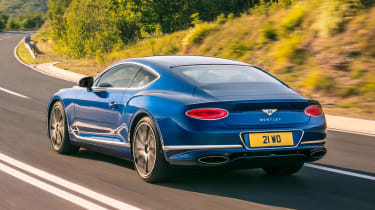 The new car’s engineers have used a ‘Super Formed’ process for the Continental GT’s bodywork. This involves heating aluminium to 500 degrees Celsius, allowing for sharper, more complex shapes and lines. By moving the front wheels 13cm further forward, Bentley has been able to lower the GT’s nose, extend the bonnet and move the engine further back for improved weight distribution.

A total of 70 paint colours, together with 15 colours for the carpets and leather and 12 different wood veneers, alongside Bentley’s bespoke colour-matching service, will allow for limitless customisation. A set of 21-inch alloy wheels is standard, while 22-inch alloys are optional and a new three-sided infotainment screen is likely to amuse and impress. 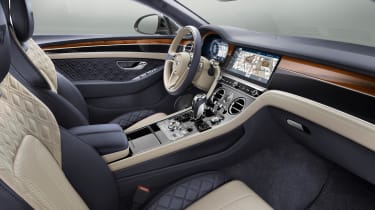 Front-seat passengers rest on 20-way adjustable leather seats with heating and cooling, while over 100 square feet (roughly the floor space of a one-car garage) of wood veneer are used in each car.

The Continental GT’s dashboard takes its shape from the lines of the Bentley badge and its designers have drawn inspiration form high-end jewellery. The headlights are said to catch the light “like a diamond”, while the “diamond-in-diamond” leather quilting is new and the optional “technical finish” for the central console pays homage to the interior workings of Swiss watches.

Under those handcrafted finishes rest the latest electrical systems. Apple CarPlay and digital dashboard dials with a 3D-effect feature, as does a 10-speaker 650-watt stereo – although 16-speaker 1,500-watt Bang & Olufsen and 2,200-watt 18-speaker Naim systems are optional. Those gem-like headlights, meanwhile, boast LED ‘matrix’ technology, meaning they can illuminate specific portions of the road ahead, effectively allowing you to use full-beam headlights without dazzling oncoming traffic or facing glare from road signs.

Sharing some mechanical underpinnings with the Porsche Panamera means the Continental gets a similar 12.3-inch “retina-quality” touchscreen in the centre, although this is very differently integrated in the Bentley and provides something of a showpiece - albeit an optional one.

When the Continental GT is switched off, this screen is hidden behind wood veneer. Start the engine and that veneer rotates to reveal the touchscreen. At the press of a button, a third side reveals itself, featuring an analogue thermometer, compass and stopwatch.

Three option packs will be offered with the new Continental GT. City Specification brings a power-operated boot, traffic-sign recognition, pedestrian detection, (urban speed) autonomous emergency braking and a 360-degree parking camera. Choose the Touring pack, meanwhile, and you’ll get a head-up display, a night-vision camera and adaptive cruise control, together with traffic-jam assist, which will keep pace with slow-moving traffic.

Further amendments to the Continental GT can be made by the company’s Mulliner personalisation team, which should be able to accommodate the most demanding of requests.

The 2018 Continental GT has the same hand-built 6.0-litre twin turbocharged W12 engine as its predecessor – although this has been “reworked” with new management software, so power is up from 582 to 626bhp.

The Continental GT’s W12 engine is able to coast at “near-to-stop” speeds, in addition to shutting six cylinders down during light demand and stop-starting in traffic. The new Continental GT officially manages 23.2mpg (up from 19.9mpg), giving an official maximum range of 459 miles thanks to the 90-litre fuel tank. 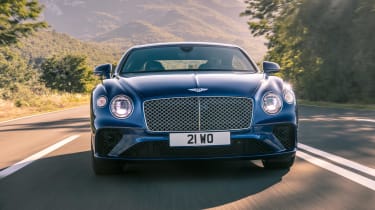 Also new for the 2018 Continental GT is an eight-speed dual-clutch automatic gearbox, which replaces the traditional ‘torque converter’ automatic that featured in the second-generation car. This new gearbox provides faster shifts and works with a launch-control system to send this two-tonne-plus car (80kg lighter than the Mk2 Continental) from 0-62mph in 3.5 seconds – a second quicker than the old model.

Bentley’s Dynamic Ride setup makes use of a new 48-volt electrical system, instantaneously adjusting the suspension based on road conditions and driver behaviour for improved handling and comfort.

The three-mode driving selector, meanwhile, provides Sport, Comfort and Bentley settings, with the last of these automatically tailoring the car’s steering, accelerator and air-suspension responses to your driving style.

A 4.0-litre twin-turbo Continental GT V8 will arrive later, as will a convertible version, while hybrid and diesel models are possibilities.

No pricing has been revealed for the 2018 Bentley continental GT, but expect an increase over the outgoing car, the W12 version of which currently starts at around £150,000. The Continental GT will be at September’s Frankfurt Motor Show and sales are understood to start in spring 2018. 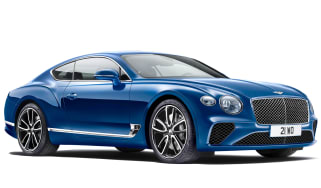