Jeep Cherokee gets a refresh for 2018 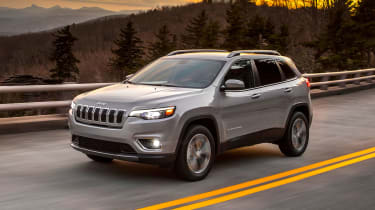 A facelifted Jeep Cherokee SUV hits UK roads in the second half of this year, with a raft of styling tweaks inside and out. The car made its public debut at the Detroit Motor Show in January.

The Volkswagen Tiguan rival has a largely redesigned front end, which retains the iconic seven-slat grille that’s sat at the front of every Jeep since the firm’s early years.Its front-end styling owes more to the current Cherokee than it does to the latest Jeep Compass, but still has angular – albeit redesigned – headlights and an angular front end. Headlights, daytime running lights and foglights are now all LED.

The rear-end styling marks more of a departure, with the numberplate housing moved higher into the bootlid and the addition of restyled rear lights. 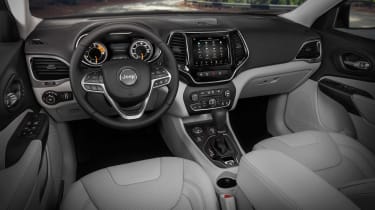 The interior has a tweaked look, with shaped air vents and centre console, but the fundamental structure remains. New ‘Satin Chrome’ and ‘Piano Black’ trim is available, but the Cherokee’s infotainment is set to get the biggest overhaul.

Don’t expect a radical shakeup under the bonnet: the 140bhp 2.0-litre and 185bhp 2.2-litre diesel engines are likely to remain the most popular choices, while an all-new 2.0-litre petrol engine featuring stop-start technology is set to be introduced. The 2.4- and 3.2-litre petrol engines will remain in the Cherokee range, but it’s not clear if these will be offered in the UK.

Jeep says that all engines can be paired with a nine-speed automatic gearbox. The car can also disconnect its rear axle from the engine, meaning two-wheel drive can be used to improve fuel economy when the four-wheel-drive system isn't required.

There’ll be no softening of the Cherokee’s rugged character either, with four-wheel drive and Jeep’s Selec-Terrain off-road systems still included as standard. Other on-board off-road systems include Jeep Active Drive I & II and Jeep Drive Lock, all three of which help maximise traction in off-road situations.

And while Jeep has confirmed it’s working on a petrol-electric hybrid system, this is unlikely to arrive until the next-generation Jeep Wrangler. Earlier this year, Jeep’s CEO Mike Manley told Carbuyer his firm was considering a hybrid version of the next Wrangler.

The plug-in hybrid Jeep Yuntu concept suggests the firm’s interest in hybrid isn’t restricted to its most iconic product; the technology could appear in more family-friendly models.