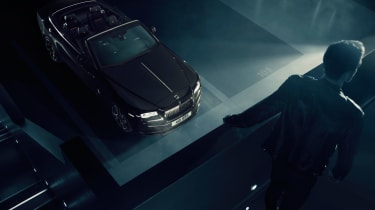 The exclusive Rolls-Royce Dawn convertible has been given the ‘Black Badge’ treatment, becoming the third model in the range to receive the upgrades after the Rolls-Royce Ghost and Rolls-Royce Wraith.

Aimed at buyers younger than the traditional Rolls-Royce customer, the Dawn Black Badge isn’t finished in just any old metallic black; its multi-layered paint and lacquer is said to create “the deepest, darkest and most intense black to ever grace a production-car surface”. 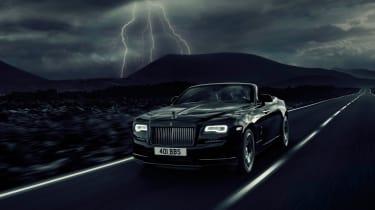 Along with the paintwork, the folding soft-top is black, along with a rear deck that’s upholstered in black leather. Even metallic parts like the exhaust tips, radiator grille surround, bootlid finisher and the ‘Spirit of Ecstasy’ bonnet ornament are finished in black chrome.

Inside, black leather upholstery contrasts with orange swathes of trim, which is intended to evoke a sunrise. Trim panels are replaced, too, using a technique Rolls-Royce has developed for weaving threads of aircraft-grade aluminium with carbon-fibre, lacquered and polished to a perfectly smooth finish. 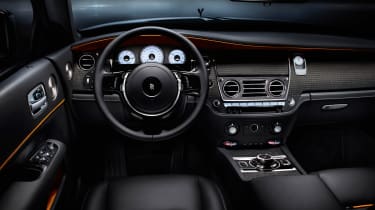 Even with the increases, the Dawn Black Badge’s 0-62mph time is the same 4.9 seconds as the standard car, with its top speed limited to 155mph, but changes to sharpen up the automatic gearbox, throttle response and suspension are intended to increase driver involvement. Larger brakes and a new active exhaust system have also been added to suit more spirited driving.

The Rolls-Royce Dawn Black Badge debuts at the 2017 Goodwood Festival of Speed, the same event where the Wraith and Ghost Black Badge were shown off for the first time in 2016. Prices for the ultra-exclusive commissions haven’t been announced, but prospective customers should move fast if they want one.