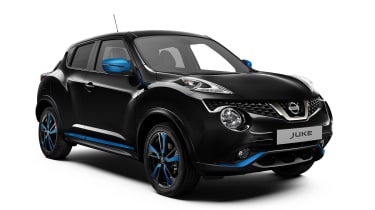 Although an all-new Nissan Juke is scheduled to arrive next year, the current model has been given a nip and tuck to keep it up to date.

First launched in 2011, the Nissan Juke was something of a pioneer, matching hatchback size and running costs with tough SUV looks. Since then, however, tough rivals in the shape of the SEAT Arona, Peugeot 2008 and Renault Captur have emerged, and the Juke also faces tough competition from the Hyundai Kona and Kia Stonic. Nissan hopes that a subtle update, as well as a £300 price drop, will keep buyers interested until the next model arrives.

Exterior changes include a redesigned front end with a new 'v-motion' grille in dark grey, as well as darkened headlamp and foglamp internals. The wheel range has been renewed, with two new 16-inch designs available on Acenta spec and above, while Tekna buyers can opt for 18-inch wheels with colour-coded inserts.

These can be chosen to match front and rear bumper finishers, side sills and mirror caps in a colour that contrasts with the bodywork – one of the personalisation offers that are optional on Tekna models but are standard on the freshly introduced BOSE Personal Edition. Meanwhile, the colour range is expanded with new Chestnut Bronze and Vivid Blue hues. 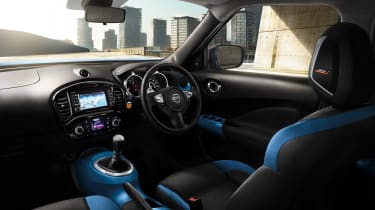 As its name implies, the latter comes with an updated BOSE stereo that was initially offered on the latest Nissan Micra supermini. The powerful system incorporates speakers in the driver's headrest, with four other speakers for an "immersive 360-degree listening experience".

Internal changes across the range include improved leather for the steering wheel, and a combimeter (Nissan's name for the display between the Juke's speedometer and rev counter) that has been made easier to read with white-on-black graphics.

The Juke range opens with the Visia, which now boasts LED daytime running lights, air-conditioning, electric mirrors, front and rear electric windows and a CD stereo with auxiliary socket. Upgrading to Acenta introduces the Nissan Dynamic Control System, which commands features as disparate as the car's climate-control and automatic headlights. There's cruise control with a speed limiter, too, as well as privacy glass, a USB port and and Bluetooth compatibility.

The BOSE Personal Edition comes next; this includes the NissanConnect infotainment system, which connects to a special Nissan smartphone act. It employs a 5.8-inch touchscreen for navigation, traffic warnings, entertainment and reversing camera displays. This joins an equipment list that includes keyless go, power-folding mirrors and part-leather seats.

The flagship Tekna brings additional driver-assistance technology, including lane-departure warning, blind-spot warning and a surround-view camera. Full leather upholstery is fitted and the front seats are heated. It also brings the extra personalisation options outlined above.

The updated Nissan Juke range is on sale now, with prices starting at £15,505 for the entry-level Visia. 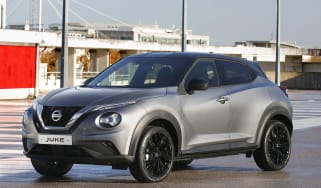