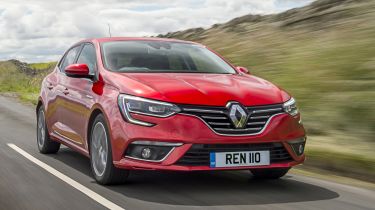 Renault has simplified its trim levels by introducing three new core models across the range – and there are some healthy price cuts, too.

Times are tough for car manufacturers, and Renault aims to bring more buyers into dealerships with its newly streamlined range structure, as well as attractive price reductions on several models.

The changes are key to Renault's 'EasyLife' philosophy, which is quoted as "simplifying choice and offering improved specification whilst offering an extremely visually appealing vehicle at every price point and reducing prices to offer even better value". As a result, the Renault Clio supermini, Captur crossover SUV and Megane hatchback and Sport Tourer estate now follow a simple three-model range structure.

Clio and Captur buyers now have two fewer models to choose from, while those in the market for a Megane will find the range has been halved. However, the introduction of entry-level Play, luxurious Iconic and sporty GT-Line models should make it easier to find the right car for your needs. Read on for a summary of the choices in the latest Clio, Captur and Megane ranges. 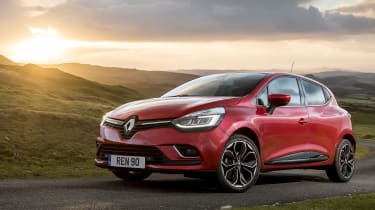 The Renault Clio is available with a choice of three trim levels. Entry-level is the Clio Play. It comes with cruise control, air conditioning, heated mirrors, 16-inch alloy wheels and a stereo with DAB radio and Bluetooth connectivity, as well as R&GO that allows access to your smartphone's navigation system. It starts at £13,500 – £445 less than the old entry-level model, despite a higher specification.

The GT Line designation is more familiar, and channels the look of Renault's respected Renault Sport models. The Clio GT-Line wears 17-inch 'GT' alloy wheels and a chrome rear diffuser and exhaust, with dark metal door inserts, front grille strip and body coloured bodykit. It also has LED front and rear headlamps with built-in daytime running lights. Sports seats, rear electric windows and a leather steering wheel complete the package. The GT-Line essentially takes over from the Dynamique S, but comes with more equipment despite a starting price of £16,025, which undercuts the old car by around £500.

GT Line is the only Clio that can't be ordered with the 74bhp TCe75 petrol engine. All three models are offered with an 89bhp dCi90 diesel engine with a five-speed manual gearbox or six-speed EDC automatic gearbox. 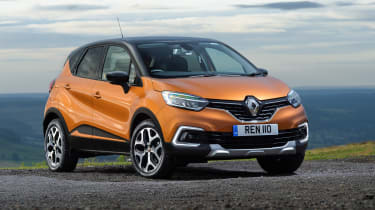 The Renault Captur Play takes over from the Expression+. It has the same entertainment hardware as the Clio Play, with DAB radio, Bluetooth and R&GO smartphone connection. There are also aux and USB sockets to connect music devices. Cruise control and air conditioning are standard, as are electric windows all round, and the drivers seat and steering wheel are reach and height adjustable. Two-tone paint and 16-inch alloy wheels complete the look. The Play starts at £15,300, which is £315 less than the previous entry-level Captur.

The Captur Iconic brings a seven-inch touchscreen infotainment system with sat nav. It also adds automatic climate control, automatic headlights and wipers,and ivory upholstery, while a leather steering wheel and chrome highlights enliven the interior. On the outside, there's privacy glass for the tailgate and rear side windows, 17-inch alloy wheels and reversing sensors. The Captur Iconic starts at £16,500 – £405 less than the Dynamique Nav that it effectively replaces.

Top of the range is the Captur GT Line, which has a more rugged exterior style complete with grey front and rear skid plates. There's greater luxury inside, too, with part-leather upholstery, heated front seats and an automatically dimming rear view mirror, as well as a seven-inch R-Link infotainment system with Android Auto compatibility and TomTom live sat nav, which includes European mapping. There are LED headlights and front cornering lights, too. The GT-LIne effectively replaces the Signature Nav, and is around £1,755 less at £18,300

The 89bhp TCe90 petrol and and dCi90 diesel engines are offered on Play and Iconic models, the latter of which offers a six-speed automatic option for the diesel engine. The GT-Line is only offered with the TCe90 petrol engine and a manual gearbox. 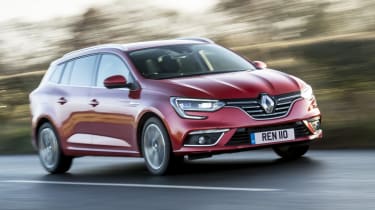 The Megane receives the same specification tweaks whether you choose the hatchback or Sport Tourer estate. In both cases, the Play gets a seven-inch touchscreen infotainment system with Apple CarPlay, Android Auto capability, USB and AUX ports, as well as Bluetooth audio streaming. There's cruise control, automatic dual-zone climate control, height and lumbar adjustable driver and passenger seats. LED daytime running lights, front fog lights and 16-inch ‘Dakota’ alloy wheels complete the exterior look. Mégane Play hatchback starts at £17,315 and the Sport Tourer Play from £18,515. This equates to a saving of £475 and £335 respectively compared to the outgoing Expression+ versions they effectively replace.

The Megane Iconic adds the R-LINK2 infotainment system with seven-inch touchscreen, TomTom LIVE sat-nav and European mapping, with sound via an Arkamys 3D speaker system. The instrument cluster boasts a seven-inch TFT screen in place of traditional speedometer, and lane departure warning is standard, along with traffic sign recognition. The Iconic gets Renault's Multi-Sense driving mode selector system with ambient lighting, and automatic headlights, automatic wipers and rear parking sensors are standard, along with 17-inch ‘Florida’ diamond-cut alloy wheels. The Mégane Iconic starts at £18,415 and the Sport Tourer Iconic £19,615 – £875 and £735 less respectively than the Dynamique Nav versions that went before.

Completing Renault's freshly streamlined model lineup is the Megane GT Line, which adds sportier looks with a bodykit, dark chrome mirrors and a silver rear diffuser, while sports seats and unique upholstery provide a racy feel inside. It also gets an 8.7-inch portrait-mounted touchscreen infotainment system with R-LINK2 Navigation. The GT Line hatchback starts at £20,215 and the Sport Tourer GT Line is available from £21,415, which spells a £575 and £435 reduction respectively compared to the previous GT-Line Nav.

The hatchback and Sport Tourer are available with the same engine choices. Every trim level is available with the 128bhp TCe130 petrol or dCi130 diesel, with a choice of six-speed manual or EDC dual-clutch automatic gearbox. This has six speeds on diesel models and seven with a petrol engine.