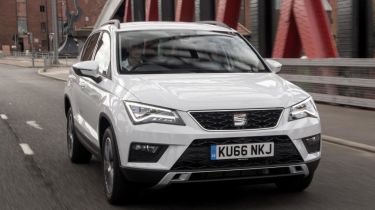 The SEAT Ateca is a medium-sized SUV that sits above the SEAT Arona in the Spanish brand’s growing model range. Sure to be favoured by families, it’s a direct rival to popular models like the Nissan Qashqai, Peugeot 3008 and Skoda Karoq. Its trim levels are fairly straightforward, starting off with S and SE, while SE Technology and FR make up the middle ground and Xcellence is the range-topping model.

Xcellence shuns the body-coloured lower bumpers of the sporty Ateca FR in favour of more rugged black trim, but it gets 18-inch ‘Performance’ alloy wheels and even projectors in the door mirrors that shine an Ateca welcome light onto the ground. Other distinctive touches include chrome exhaust pipes, aluminium roof rails, tinted rear windows and full LED headlights.

Compared to the SE trim, Xcellence is distinguished inside with leather upholstery and sports seats, a black roof lining and ‘multi-colour’ ambient LED lighting along with aluminium door sills as you step inside.

SEAT is hoping to become a leader for in-car technology, and the Ateca Xcellence shines here. Features like a rear-view camera, keyless entry and a wireless phone charger should make life that bit easier for owners in a hurry. There’s also a navigation system with 3D mapping and DAB digital radio. SEAT’s Convenience Pack (auto-dimming rear view mirror, automatic headlights and wipers) and Winter Pack (heated front seats, headlight washers and windscreen wash level) are thrown into the mix as part of the Xcellence package too.

Whether choosing Xcellence is worth spending around £1,500 extra versus our favourite SE Technology trim will be down to the individual. On the one hand, SE Technology offers the same 18-inch wheels, LED headlights, sat-nav and aluminium roof rails, so it’s very well equipped. On the other, if you were to tot up the cost of adding items like leather seats, a rear-view camera and both the Convenience and Winter Pack, Xcellence doesn’t look bad value if those features appeal. 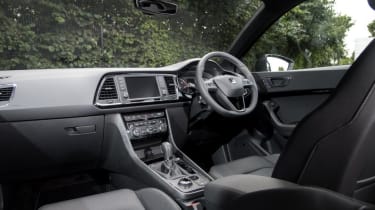 Because of its top billing, the Xcellence trim isn’t available with the entry-level 1.0-litre 113bhp petrol engine, but a powerful diesel engine is exclusive to FR and Xcellence trims. Stick with petrol and there’s a 1.4 or 2.0-litre TSI, with 148 and 187bhp respectively. The smaller engine can return just over 50mpg, while the larger engine with a standard automatic gearbox and 4Drive four-wheel drive is rather thirsty, managing just 40mpg.

Two diesels are on offer - a 1.6 or 2.0-litre TDI, with the smaller engine offering 113bhp and returning 63mpg. It’s only available with front-wheel drive and a six-speed manual gearbox. Next, the 2.0-litre with 148bhp comes with a manual gearbox and four-wheel drive, while the range-topping 187bhp also gets 4Drive but has a standard automatic DSG gearbox.

Unless you plan on driving huge distances (more than around 12,000 miles a year) we’d recommend the 1.4-litre TSI engine, because not only is it smooth and economical, it’s around £3,000 cheaper than the 2.0-litre diesel in Xcellence trim. It’s also a better deal for company-car buyers, sitting in the 25% Benefit-in-Kind (BiK) band, as opposed to 31% for the diesel, reducing monthly bills.

It’s also worth sticking with the slick manual gearbox unless you really need an automatic. This saves a further £1,300, but more importantly, we also found the DSG automatic gearbox jerky around town where the Ateca is usually in its element. It can make parking tricky and tends to hesitate when you want to pull away at roundabouts and junctions. It improves significantly at higher speeds, offering fast changes that complement the Ateca’s sporty feel.

SEAT has given its SUV slightly firmer suspension than its Volkswagen Tiguan sister model, so it feels like a well-sorted hatchback along a twisting road. It’s also slightly firmer, which would put us off choosing optional 19-inch alloy wheels and making the ride comfort worse.

We don’t often recommend the top trim level, but while SE Technology makes sense for most buyers, Xcellence is a good option if you want a SEAT Ateca with the latest features. It works well with the 1.4-litre petrol engine, but it’s a shame the DSG automatic isn’t smoother around town. 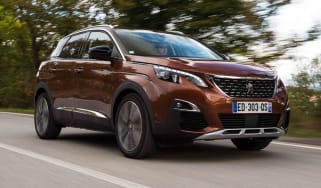