The four-seat Cayenne Coupe is available to order now, with prices starting at £62,129 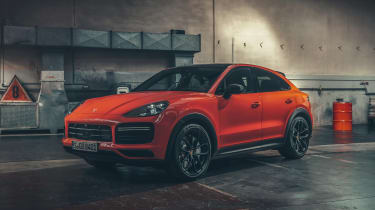 Porsche has unveiled a coupe version of the Cayenne SUV, expanding the range and providing a rival to the Mercedes GLE Coupe and BMW X6. It offers sportier looks at the expense of outright practicality, and comes with a glass panoramic roof as standard. The Porsche Cayenne Coupe is available to order now, with prices starting from £62,129.

The Cayenne Coupe has undergone serious bodywork changes compared to the standard Cayenne SUV. Its roof is 20mm lower, the front windscreen and pillars have a shallower angle, and the rear doors have been completely redesigned too. At the back, there’s a new roof spoiler, and an adaptive spoiler below the windscreen that pops up 135mm at 56mph and above.

The Cayenne Coupe is one of the first cars to feature a panoramic roof as standard - normally it’s a costly optional extra - but you can choose to replace it with a lightweight carbon-fibre roof instead. If you pick a sports pack, which is featured on the car in these images, you’ll also get 22-inch alloy wheels, extra styling touches and carbon-fibre interior trim pieces, plus a sports exhaust on the Turbo model. The standard specification includes 20-inch alloys, front and rear parking assistance, adaptable suspension and Porsche’s Sport Chrono package. 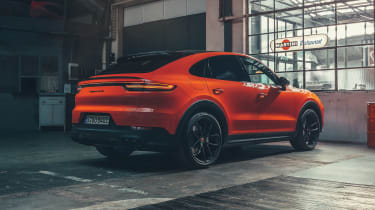 Unlike the Cayenne, the Cayenne Coupe is a four-seater as standard, with sports seats fitted in the rear too. However, you can turn it back into a five-seat car for no extra cost. The Coupe’s heavily sloping roofline would normally cut into headroom, so Porsche has mounted the rear seats lower than in the Cayenne to compensate. Despite the coupe shape, the car is still very practical (although the boxier standard Cayenne is more practical still) - there’s 625 litres of space on the Coupe, with 1,540 litres available with the rear seats down.

You can choose from two engines in the Cayenne Coupe. A 3.0-litre V6 petrol engine producing 335bhp is the default option; it gets the car from 0-62mph in six seconds flat and tops out at 150mph. That power and performance means it manages just 23.9mpg in mixed driving and emits up to 215g/km of CO2.

You can order the Porsche Cayenne Coupe now, with deliveries expected to start by the end of May. The 3.0-litre V6 version starts from £62,129, while you’ll be forking out at least £104,729 for the searingly fast Turbo version.

The Porsche Cayenne Coupe will join a hotly contested space in the market when it arrives. While practically often takes a hit, styling a premium SUV in a sporty, coupe-like manner is a great way for manufacturers to give its models more buyer appeal, especially in the rapidly growing Chinese market. BMW started the trend with its X6 SUV, but now there’s more choice than ever

If style and individualism are more important to you than outright practicality, the new breed of rakish SUVs should suit – the majority are no worse to own or drive than their standard counterparts.

To learn more about the Porsche Cayenne SUV, read our full review, or see how it compares to the best large SUVs you can buy in 2019.