In R-Line trim, the Volkswagen Touareg is luxurious and has lots of convenience features 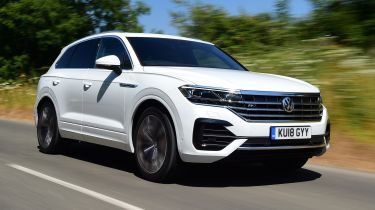 The luxury car market is booming and rather than opulent saloon cars or coupes, it's lavish SUVs that are taking the lead; SUVs like the Volkswagen Touareg, which is the brand's flagship model and a technological tour de force.

Thanks in part to the arrival of the seven-seat Volkswagen Tiguan Allspace sitting beneath it, Volkswagen have been able to push the Touareg, its most expensive SUV, upmarket and aim it squarely at the Mercedes GLE, BMW X5 and Volvo XC90.

Wider and longer than before, with an expansive grille, the Touareg certainly has an imposing stature. This size makes it practical for families too, with loads of space for five occupants to get comfortable and a massive 810-litre boot to swallow luggage on long trips. With a tow bar attached, the Touareg can also pull a hefty caravan and help take the stress out of reversing with a trailer. 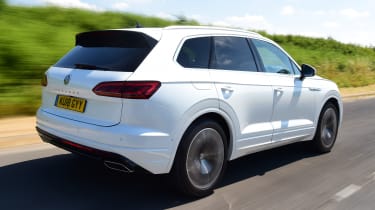 The popular R-Line trim sits in the middle of a simple range, sandwiched between the entry-level (but still luxurious) SEL and R-Line Tech grades. Major external changes for the R-Line include upgraded 20-inch alloy wheels, sports suspension, privacy glass, body-coloured wheelarches and a more aggressive body kit. The interior also gets a makeover courtesy of gloss black inserts in the dashboard, doors and centre console, a black headliner, and R-Line steering wheel and door sills.

Tech-savvy families will appreciate four-zone climate control and four USB charging sockets in the front and two in the rear, along with wireless smartphone charging in the front centre console. R-Line also brings and an automatic powered tailgate to make it easier to get the weekly shop in and out of the boot, while a rear-view camera and self-parking should be handy in the supermarket car park. However, it does miss out on the 'Innovision Cockpit', which consists of a 12-inch instrument and 15-inch infotainment display that's found in the R-Line Tech trim and costs around £3,000 extra. 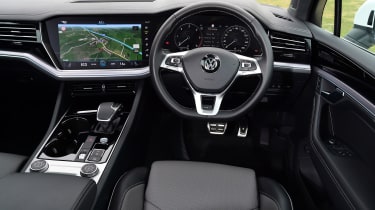 The Touareg R-Line trim is available with two diesel engines, both of which are versions of the same 3.0-litre V6 TDI with standard 4MOTION four-wheel drive and an eight-speed automatic gearbox. The first has 228bhp, so it's hardly sluggish, while the top 282bhp version propels the big SUV from 0-62mph in an impressive 6.1 seconds. Volkswagen's official fuel-efficiency figures are identical for both cars, sitting at 42.8mpg, while emissions of 173g/km mean it sits in the top 37% Benefit-in-Kind (BiK) band for company-car drivers.

Under its skin, the Touareg is based on the same underpinnings as the Bentley Bentayga, and despite its much lower price, a lot of the same advanced chassis technology is also available. Air suspension, four-wheel steering and active anti-roll bars are all optional extras that can boost comfort, agility and handling. This is no sports SUV in the mould of the Porsche Cayenne, however, instead it prioritises hushed refinement and a smooth ride rather than sharp handling.

The Volkswagen Touareg R-Line might look very expensive, costing from just over £50,000, but it undercuts most rivals and looks cheap next to the Bentley Bentayga it shares many parts with. So long as you don't want your luxury SUV to serve up a sporty drive, the Touareg is a handsome, well-equipped model in R-Line trim. When you're spending this much, however, it might be worth splashing out a few grand more for the Touareg R-Line Tech to get Volkswagen's latest infotainment system.