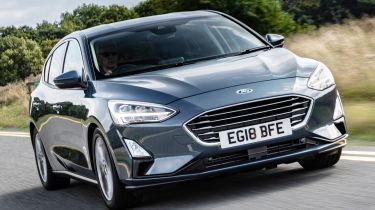 The Ford Focus has, for many years, been the default choice for those looking for an entertaining driving experience from their family hatchback. Of late, other manufacturers – VW with its Golf and Kia with the Ceed – have upped their game and the Focus, while still enjoyable to drive, started to feel its age with less than impressive interior space and below par fixtures and fittings.

Thus, this new fourth generation is vital for Ford and needs to offer the premium space and cabin feel of its closest rivals, while retaining its crown as the best of the bunch in terms of driver involvement.

As we’ve come to expect from Ford, there’s a wide range of models to choose from with several different trim levels and a range of Ecoboost petrol engines. The entry-level model is the Style which comes with a DAB radio, electric windows and manual air conditioning. While it is a little sparsely equipped it is priced competitively, starting at £18,300. For an additional £1,300 or so you can upgrade to the Zetec, which adds alloy wheels, cruise control, a quick clear screen and Ford’s SYNC system, complete with an eight-inch screen and Apple CarPlay and Android Auto connectivity.

You can then choose from two sportier offerings, the ST-Line and ST-Line X, or the plusher Titanium and Titanium X models. If you really need your Focus to have all the bells and whistles, there’s the swish top of the range Vignale, although with prices in the region of £30,000 for the more powerful examples, it makes the Focus expensive. 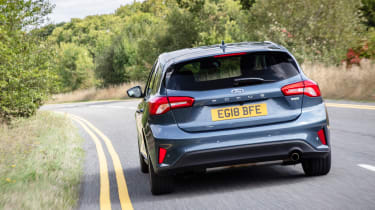 The petrol engine range comprises two three-cylinder units of 1.0- and 1.5-litre capacities –with the former available in 84, 99 and 123bhp power outputs, with emissions as low as 107g/km and economy ranging from 47 to 60mpg. While the 84 and 99bhp versions feel fine in the smaller Fiesta the larger and heavier Focus with the same engines does feel a little slow. The 1.5-litre Ecoboost comes in two states of tune, 148 or 180bhp, offering significantly better acceleration without too much of a penalty in terms of economy and emissions.

The standard Focus transmission is a six-speed manual but an eight-speed automatic – complete with Jaguar-style rotary gear selector – is also offered on the 123bhp 1.0-litre engine and on both the 1.5-litre models.

An extensive model line-up then, but have there been enough changes elsewhere to counter the Focus’s lack of space? The wheelbase has been lengthened by 53mm, which finally gives rear seat passengers the legroom that’s been missing, and there’s plenty of headroom in the back for taller passengers. The dashboard has also been moved forward so the cabin now feels very spacious.

There’s been a significant rise in the quality of the fixtures and fittings inside the Focus, with soft-touch plastics being used for the sections of dash you’re likely to touch. Overall it has a very solid and premium feel without actually beating the Golf in any particular area. The latest touchscreen is easy to use, has a powerful processor and is quick to change functions.

Boot space used to be an issue in the Focus, lagging behind its rivals, but it’s now virtually on a par with the VW Golf (there’s a couple of litres in it) but at 375 litres the Focus is a little behind the Kia Ceed’s 395 litres and some way back from class-leaders (from a luggage point of view), such as the Fiat Tipo with its 440-litre capacity.

Read our full review of the Ford Focus

The Focus is much roomier though, and along with the improvements in the interior the only question remains as to whether it’s still the driver’s car of choice in this class. In short, the answer is yes. It has an excellent ride quality, both around town and on faster roads, absorbing lumps and bumps very effectively, but it’s the steering that really impresses and makes the Focus feel very agile.

On faster roads the Focus offers impressive turn-in to corners and its grip levels are high, and you soon learn to trust the car implicitly to follow commands from the steering wheel. The Focus is the best car to drive in the class and even better than its predecessor. The 1.0-litre Ecoboost models have a simpler rear suspension setup, with the 1.5-litre benefiting from a more sophisticated multi-link system. Nevertheless, even the base models offer exceptional driver satisfaction.

All in all, the new Focus really is an exceptional car, having improved significantly in the areas where the previous model was lacking and continuing with its party piece of being a keen drivers’ car too. The new class leader? We think so.