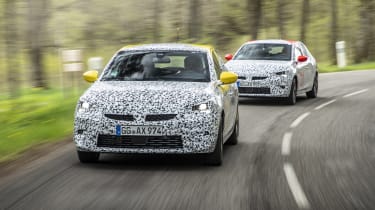 The Corsa remains a car of huge importance for Vauxhall, with UK car buyers ensuring the model is still a bestseller. Vauxhall will hope the sales success continues with the sixth-generation model, which will arrive in showrooms later this year.

Featuring a new platform and design, the next Corsa will compete against recently revised rivals such as the Ford Fiesta, Volkswagen Polo and the all-new forthcoming Renault Clio. To see how it compares, we’ve driven a prototype version.

The sixth-gen Corsa has gained new engineering tech from Vauxhall’s parent company, Peugeot-Citroen (PSA Group). It is underpinned by the French firm’s CMP (Common Modular Platform) - often referred to as EMP1. The standout statistic is that the new model is a massive 108kg lighter, which is a 10% drop over the old car, depending on the exact spec. 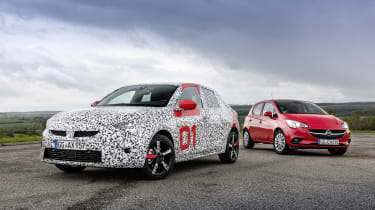 Part of this weight-saving comes from the new range of three and four-cylinder engines that are around 15kg lighter than before. Elsewhere, the new Corsa features a lighter aluminium bonnet saving 2.4kg, a 15% stiffer body, which is also 40kg lighter, and new seats that save another 10kg. In it's lightest form, the new model weighs only 980kg.

The benefit of all the car’s lower weight is improved performance, handling and efficiency. According to Vauxhall, every one of the new Corsa’s petrol and diesel engines offers improved efficiency over the most eco-friendly variant of the previous generation.

The best-seller at launch is likely to be the turbocharged 1.0-litre three-cylinder petrol engine. This unit produces 99bhp and powers the front wheels via a six-speed manual gearbox. We also tested the eight-speed automatic gearbox with a more powerful 128bhp version of the 1.0-litre engine that is yet to be confirmed for the UK market. A 1.5-litre diesel option will also be available, producing 99bhp with a six-speed manual gearbox as standard.

The 99bhp version of the 1.0-litre petrol engine delivers a consistent flow of turbocharged power from low to mid revs, with a typical thrummy three-cylinder noise that is never intrusive. It ensures brisk progress with the six-speed manual gearbox, which is easy to use and offers smooth and precise gear changes.

The eight-speed automatic gearbox offers a similar experience, albeit with slightly slow gear changes at times. It is smooth though, so should suit buyers who opt for the automatic variant. The prototype cars we tested were around 80% complete, with different settings across the manual and automatic versions as Vauxhall completes the final setup for both.

Overall, the new model has impressively light and quick steering, which should make it comfortable for town driving. This setup makes the new Corsa feel nimble and light to drive, thanks in part to a revised steering rack and lighter body. 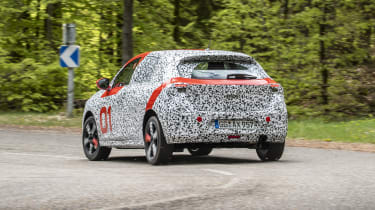 During town driving, both test cars suffered from a slightly harsh ride quality at lower speeds. At higher speeds, though, the Corsa offers a smooth and refined ride quality, which was only unsettled by the very worst road surfaces.

Handling is also improved, with body roll reduced compared with the old car. This is due to improved suspension; a 48mm lower roofline and a 28mm increase in its wheelbase gives the car a noticeably lower centre of gravity. The new, lighter chassis is also more responsive to drive, with the longer wheelbase making it more practical than the previous model.

The boot is now 24 litres larger than before, with 78mm more width giving 309 litres of total load space. The new Corsa will only be available as a five-door model, so access to the rear seats is improved, with an acceptable amount of legroom for rear passengers. The rear headroom is also similar to the old car, despite the lower roofline.

Additional improvements over the old Corsa include aerodynamic underbody cladding that helps smooth airflow under the car. At the front, an active aero shutter helps reduce drag further still, all combining to increase fuel efficiency and help reduce CO2 emissions.

These aero efficiencies will make their way to the all-electric Corsa-e, which will sit alongside the conventional petrol and diesel models in the range. The CMP platform that underpins the new Corsa has been designed to accommodate a fully electric drivetrain, and Vauxhall says the electric model will have a 50kWh battery giving a range of 211 miles between charges. The Corsa-e should offer decent performance thanks to 134bhp from its electric motor.

Do you want to know more about the new Vauxhall Corsa? Read our in-depth preview of the upcoming sixth-generation model here.