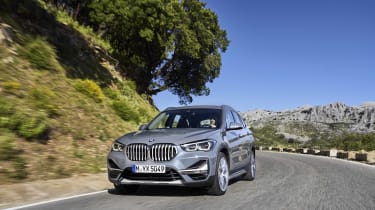 The BMW X1 xDrive25e plug-in hybrid is now available to order. Prices start at £38,200 - a jump of almost £10,000 over the entry-level model - and first deliveries are expected in March. In a few months’ time, the hybrid BMW X2 will join the range, using the same powertrain. The price of this model, plus final specs, will be revealed closer to launch.

The xDrive25e models feature a 94bhp electric motor connected to a 10kWh battery along with a 123bhp 1.5-litre petrol engine. The petrol engine sends power to the front wheels and the electric motor drives the rears. BMW claims the X1 xDrive25e can complete 0-62mph in 6.9 seconds and go on to a top speed of 120mph, while the X2 is slightly faster, with figures of 6.8 seconds and 121mph.

Efficiency statistics have only been revealed for the X1 PHEV so far, and this model officially manages up to 148.7mpg. CO2 emissions stand at 48g/km, and the car manages up to 35 miles of electric-only range with a fully charged battery. The X2 xDrive25e will almost match these numbers but BMW will release final figures nearer to the time the car goes on sale.

Charging takes around five hours using a household socket, falling to a little over three hours using a BMW i Wallbox fast-charger. You can choose from ‘Max eDrive’, ‘Save Battery’ and ‘Auto’ driving modes, which tell the car to run on electric, petrol or a combination of both respectively. In the Auto mode, the car uses information from the sat nav to work out when to use the engine and when to use the electric motor.

The battery and electric motor only slightly reduce the available boot space in the X1, and you can expect it to be a similar story in the X2. There are 455 litres of space behind the back seats of the BMW X1 xDrive25e, compared to 505 litres in non-hybrid versions. A 40:20:40 split-folding rear bench is standard and folding it down brings total luggage space to 1,470 litres.

The X1 is BMW’s best-selling SUV and the styling has been tweaked rather than overhauled for this facelifted model. At the front, the grilles are now larger and joined together, while the bumper, air intakes and silver trim pieces have all been slightly reshaped. The LED headlights have also been redesigned, while the fog lights are now LEDs. Changes are similarly minor around the back, with new LED tail-lights, larger exhausts and a restyled bumper and diffuser combination. Four new alloy wheel choices, ranging from 17 to 19 inches in diameter, and three new metallic paint colours are available.

Besides the hybrid, the engine range consists of the same two petrol and two diesel options as before. Kicking off the range is the front-wheel-drive 138bhp 1.5-litre sDrive18i, which manages 0-62mph in 9.7 seconds and a top speed of 127mph, returning up to 56.5mpg. The other petrol, the sDrive20i, is also two-wheel-drive, and offers 189bhp. Acceleration to 62mph takes 7.7 seconds and the top speed is 140mph. In mixed driving, you can expect up to 52.3mpg, while CO2 emissions are 129g/km - slightly higher than the sDrive18i. Four-wheel-drive is available on the larger petrol, and the xDrive20i model offers slightly worse fuel consumption but a slightly quicker 0-62mph time.

A 148bhp 2.0-litre engine is the most affordable diesel choice and can be had with either two or four-wheel drive. This model takes 9.4 seconds to complete 0-62mph, and returns either 53.3 or 55.4mpg depending on whether you choose front- or four-wheel drive. The 187bhp version of the 2.0-litre engine (xDrive20d) is only available with four-wheel-drive but matches the 55.4mpg of the xDrive18d. Its CO2 output is slightly higher than the 18d - 123g/km compared with 114g/km - but its 0-62mph time drops by almost two seconds. The xDrive20d’s top speed is 136mph.

The interior changes include touchscreen functionality on the iDrive infotainment system, new upholstery choices and contrasting stitching. The rear seats split 40:20:40, the seatbacks can adjust to six positions and the seat bases can slide forwards and backwards to improve passenger or boot space.

Read our review of the X1 for more information, and see how it compares to its main rival, the Audi Q3.