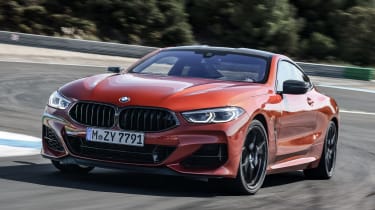 The BMW naming system is relatively simple – the bigger the number, the more premium the car. Which puts the M850i at the top of the BMW range. The 8-Series name was retired for a couple of decades, but now it is back as a new four-seat coupe. Does this new model deserve its flagship status?

The 8-Series, which is also available as a convertible and a four-door ‘Gran Coupe’, is designed to be as comfortable as a Mercedes S-Class Coupe and yet be as sporty as an Aston Martin DB11. That’s a tall order against some formidable rivals.

The BMW’s dimensions are slap bang between these two competitors. It perhaps lacks the graceful looks of that particular pair but has a significant presence on the road. It looks muscular in all the right places, with wide wheel arches and slim headlamps. 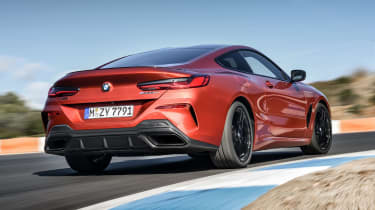 Those headlights are one of the many parts of the 8-Series which are technologically advanced, as LED lights are standard, with sophisticated, adaptive laser lights available as an option.

Inside, there’s more tech. It is fitted with the latest version of BMW’s iDrive infotainment system which is now much improved and easier to use. It’s a much slicker system only let down by the absence of Android Auto compatibility.

There’s nothing as old fashioned as traditional dials either. The car’s vital statistics are displayed on a sizeable 12.3-inch screen, with various functions being controlled by merely making gestures at the screen. It always seemed a gimmick on other BMWs but is now refined to the point where its simple to use.

Once settled in and on the move, it doesn’t take long to realise that the 8 Series is undoubtedly a refined grand tourer, which is capable of covering long distances effortlessly. The cabin is hushed, and the ride is generally very smooth, although those big 20-inch wheels can crash over potholes occasionally. 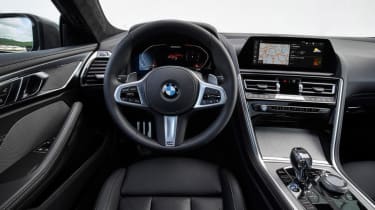 Ask the 8 Series to perform though and it becomes a proper supercar. The M850i xDrive has a 523bhp 4.4-litre V8 mated to a slick eight-speed automatic transmission and four-wheel-drive system. It feels every bit as fast as the 3.7-second 0-62mph time suggests, and it’s accompanied by a menacing roar, especially with the exhaust switched to ‘Sport’ mode.

Push it through the corners and the M850i remains composed. There’s very little body roll, huge grip, with the four-wheel-drive system allowing you to put down the power easily.

But there’s no disguising the significant mass that’s being moved when you thread the M850i through corners and it doesn’t feel as sporting as lighter rivals, despite a four-wheel-steering system.

Driving enthusiastically will hit fuel consumption though. BMW claim the M850i is capable of 28.8mpg, but that falls fast if you use its performance. Depreciation is likely to be an even bigger cost. Cars like the M850i have traditionally shed their values quickly in the first few years of ownership.

One advantage a good GT should have over sportscar though is practicality. Whereas some supercar owners will have to leave their kids at home and pack light, the BMW has a huge boot. Rear seat space will be a little tight though unless your children are young. If you need more room, BMW will happily point you towards one of its more spacious models, including the Gran Coupe version of this car. The M850i is about style, technology and performance, as a good flagship should be.

The BMW M850i occupies a niche between the ultra-refined Mercedes S-Class Coupe and the sportier, sharper Aston Martin DB11. It looks purposeful, is packed with technology, has a huge boot and a drivetrain which can propel this big car faster than the laws of physics should allow. That might be the perfect combination for well-heeled buyers who need a car which is comfortable and relatively practical when it needs to be, but can also provide most of the entertainment of a pure supercar. It’s not brilliant at any one area, but is great at doing most things. 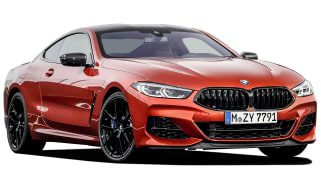