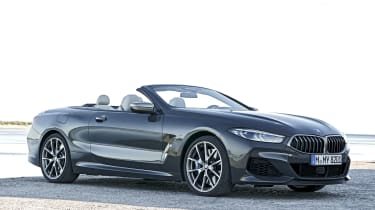 The BMW 8 Series Convertible adds an extra layer of excitement to the already impressive performance of the Coupe, allowing its engine to be heard more clearly without much in the way of compromise.

This is partly thanks to the 8 Series' 'Carbon Core' spine, which has allowed engineers to make the drop-top virtually as stiff as the Coupe, while only adding 125kg of weight. There's little difference in handling as a result, with four-wheel steering boosting agility and four-wheel drive giving the 8 Series Convertible massive amounts of grip.

As a result, the big BMW might not be as fun as the smaller BMW Z4, but it's sportier than rivals like the luxurious Mercedes S-Class Cabriolet. In M850i xDrive guise it's also searingly rapid in a straight line, taking 3.9 seconds to launch from 0-62mph. Choose the more sensible - and £20k cheaper - 840d xDrive and the same benchmark increases to 5.2 seconds, but fuel economy increases to around 40mpg. 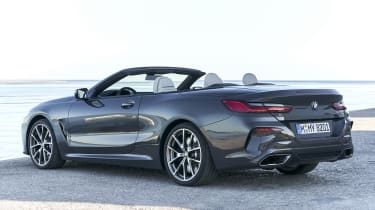 Like the driving experience, its interior strikes a balance between comfort and sporty pretensions, with figure-hugging seats upholstered in Merino leather. Its fabric roof can be raised or stowed in just 15 seconds at urban driving speeds, making it ideal for changeable British weather, but it does reduce practicality slightly. Most noticeably, the boot shrinks by 150 litres compared to the 8 Series Coupe when the roof is down. The small rear seats also have slightly less shoulder room in the Convertible.

Despite reasonable fuel economy, the BMW 8 Series Convertible is always going to be pricey to run

Expect steep running costs no matter whether you choose the petrol or diesel BMW 8 Series Convertible. Every version has emissions north of 160g/km of CO2, placing the drop-top in the highest 37% Benefit-in-Kind (BiK) band for company-car drivers. 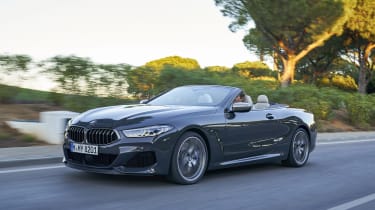 While hardly a surprise given the performance on offer, fuel economy is also nothing to write home about. The diesel will have its merits for high-mileage drivers, returning up to 39.8mpg, but we're not sure how many 8 Series Convertible owners will rack up motorway miles. In cases where they don’t, the petrol's 26.6mpg might not be too offputting.

Insurance groups haven't been confirmed yet, but the Convertible will almost certainly get the same group 50 (out of 50) classification as its Coupe sibling, adding to the overall cost of ownership.

The BMW 8 Series Convertible strikes a fine balance between a sports car and a grand tourer, proving both comfortable and surprisingly agile. We say ‘surprisingly’ because this is a car that's longer than many SUVs and weighs more than two tonnes. We're told it's just 125kg heavier than the Coupe though, and thanks to its carbon-fibre-reinforced plastic construction, it's also 97% as stiff, despite its open roof. 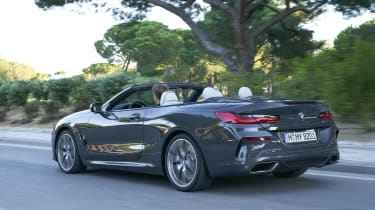 Four-wheel steering with rear wheels that can turn a few degrees helps the big BMW to feel keen through tight corners, while xDrive four-wheel drive means the overriding sensation from behind the wheel is one of grip. Owners of more playful BMW's may find this a bit disappointing, but it's hard not to be impressed by the unflappable pace of the M850i Convertible over a twisty road.

We've only tested the 4.4-litre V8 petrol so far, and losing the roof certainly gives it a new character. Flaps in the car’s sports exhaust open in its most aggressive driving mode, unleashing snaps and bangs when you lift off the accelerator. There's no doubting its performance either; 0-62mph in just 3.9 seconds leaves us pondering how fast the full-on BMW M8 will be when it arrives.

It's not quite as opulent as some rivals, but this is still one desirable interior

Unlike the luxury-focused BMW 7 Series saloon and BMW X7 SUV that ride on air suspension, the 8 Series Convertible gets steel springs with adaptive dampers. This helps explain its reassuring handling, and while comfort impresses, there's a firmness to the BMW that gives it a sportier feel than some rivals like the Mercedes S-Class Cabriolet. The folding fabric roof can be raised or lowered in 15 seconds at up to 31mph, while a wind deflector over the rear seats helps minimise buffeting for front-seat occupants. 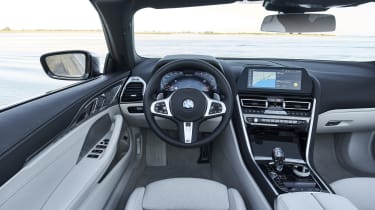 This theme is carried over to the interior itself, as while the BMW's design is certainly upmarket and well appointed, it doesn't feel as sumptuous as the Mercedes, so it's likely to suit a slightly different customer. BMW's iDrive infotainment system looks good and works as well as ever.

There are no trim levels as such, but the diesel 840d and petrol M850i get unique specifications. Costing around £80k, the diesel is still fully loaded with BMW Live Cockpit, climate control that blows hot air on your neck, adaptive LED headlights, leather upholstery, cruise control, a head-up display and numerous parking aids. The M850i brings unique 20-inch wheels, grey painted exterior trim, a different bumper and a sports exhaust. 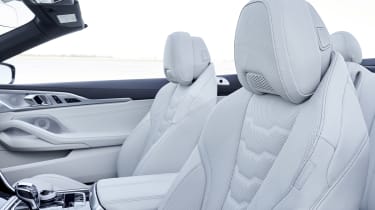 A myriad of optional extras are also offered, from a Premium Package that adds ventilated front seats and soft-close doors to a Visibility Package introducing laser headlights and the availability of a Bowers and Wilkins surround sound stereo system.

The soft-top impedes boot space, but versatility isn't bad next to rivals

While the front of the 8 Series Convertible is as spacious and comfortable as you'd expect, its rear seats are best thought of as fit for occasional or emergency use. They're certainly not as comfortable as those found in the back of the Mercedes S-Class Cabriolet, although considering the S-Class has a 123mm longer wheelbase, that's not surprising. 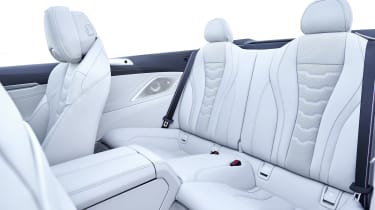 The coupe's sizeable 430-litre boot has been reduced somewhat by the folding roof mechanism, with 350 litres available when the roof is up. This reduces to 280 litres if you want to fold it down, but there's still the option to split and fold the 50:50 rear seats for extra luggage space.

Costing north of £80,000, customers won't be too pleased if the BMW 8 Series Convertible proves unreliable, but the German manufacturer's recent fall from grace in our Driver Power survey could be a worry. It slipped to 21st out of 26 brands in our 2018 results, behind Jaguar, Mercedes and Lexus. However, the 8 Series’ status as a flagship model should see little expense spared in its engineering, and it's built in the same factory as the BMW 7 Series. 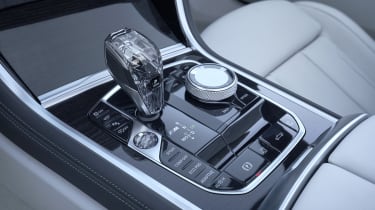 It's also a showcase for the latest BMW safety technology, with its exterior covered in an array of cameras and sensors designed to spot vehicles, pedestrians and cyclists, even hitting the brakes if a collision is deemed imminent. A new head-up display with a larger viewing area also ensures the driver's eyes are focused on the road ahead as much as possible. 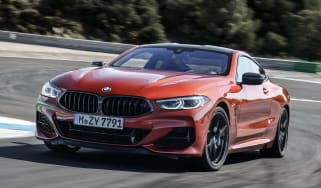 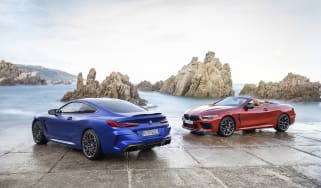 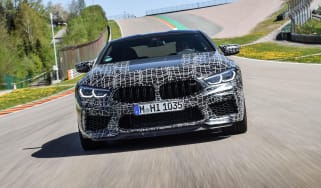