It's possible to send all the power to the rear wheels if you want a pure front-engined, rear-wheel-drive experience, but given the engine’s performance, it may not always be advisable to do so. The M8 Competition is a two-tonne missile that could reach 200mph if it weren't electronically limited to 155mph (upped to 190mph as an option). While a slightly less powerful, standard M8 is available in some markets, we're only getting the sharper Competition version in the UK. Acceleration from its twin-turbo V8 is eye-watering, with 0-62mph taking just 3.2 seconds, but even with all the performance boxes ticked, it feels like there's something lacking. 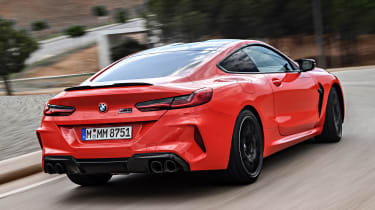 An uninspiring exhaust note and the M8 Competition's size and weight means it feels more like a seriously quick grand tourer than an agile sports car and, even in its most hardcore settings, it arguably feels too sensible. This is exacerbated by its interior, which is more luxurious and comfortable than sportier rivals.

Its sumptuous leather seats, the effortless power of its engine and a smooth eight-speed automatic actually make it closer to a cut-price Bentley Continental GT. The M8 is a car that's ideal for covering huge distances very quickly, rather than one to push hard on a twisty road for the sake of it.

Managing around 25mpg, the M8 is likely to have one of BMW's last big V8 engines

The M8 is clearly built for performance first and foremost but that's not to say all the fuel-saving 'Efficient Dynamics' technology built into 'normal' BMWs has been thrown out. The car’s 4.4-litre V8 still features auto start-stop that switches off the engine in traffic, along with regenerative braking to use otherwise wasted energy to help power the car's electronic systems. As well as generating lots of power, its turbochargers and precise direct injection fuelling can also help save fuel when you're cruising on the motorway. 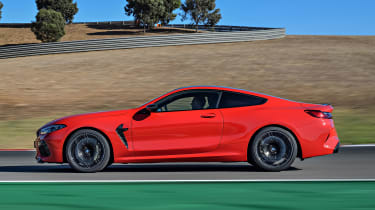 After all this, the M8 can manage just over 25mpg, with CO2 emissions of 242g/km, so it certainly won't be cheap to run. You'll also need to factor in BMW servicing, which you've told us is expensive in our Driver Power customer satisfaction survey, along with pricey replacement tyres, brakes and fluids.

The BMW M8 Competition is the fastest road car the German manufacturer has ever produced, with an astonishing 616bhp from its twin-turbocharged 4.4-litre V8 engine. That's more power than a Porsche 911 GT3 or an Audi R8, and the M8's 0-62mph time of 3.2 seconds is even faster than the iconic, BMW-powered McLaren F1 supercar. 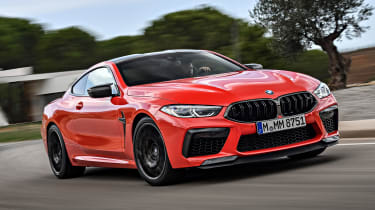 In its normal guise, the M8's top speed is electronically limited to 155mph, but adding an optional M Driver's Package sees this figure increase to 190mph. If you were able to disable the limiter altogether, the car would be capable of over 200mph. Power is sent to the wheels via a complex four-wheel-drive system, which can be switched to full rear-wheel drive if you're feeling brave enough on a track. In reality, the M8 Competition is faster and more capable with all four wheels sharing the power.

Despite its huge level of ability, there's something missing from the M8 Competition. While the Porsche 911 and Audi R8 are evocative, involving sports cars to drive, the BMW feels more like a rapid grand tourer. That's partly down to its hefty 1,960kg kerb weight but also because its engine lacks aural excitement and the automatic gearbox is better at being smooth than snappy.

The M8 is better equipped and more luxurious than most rivals

The M8’s GT feel is only emphasised by the interior; it's beautifully built, better equipped than most rivals and more spacious. For a coupe, the M8 feels like a big car from behind the wheel, and you sit in beautifully upholstered and stitched leather sports seats. Huge digital displays for the instruments and infotainment system dominate the view forwards, with BMW's latest software bringing a host of features and a slick interface. An attractive steering wheel adds to the sense of occasion, and its bright red M driving mode rocker switches allow you to quickly jump to your preferred vehicle settings when an enjoyable stretch of road arrives. 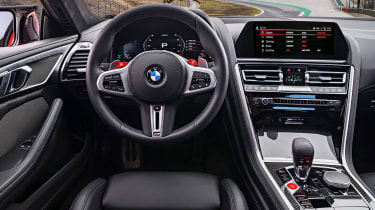 With a 420-litre boot, the M8 Competition is ideal for long trips away

Despite competing on price with models including the Aston Martin Vantage and Porsche 911, the M8 Competition is actually slightly longer than an Aston Martin DB11. It's not a small car then, and this pays dividends if you want a fast, desirable car that also has a big boot. The M8’s 420-litre boot is larger than the one in a Volkswagen Golf. 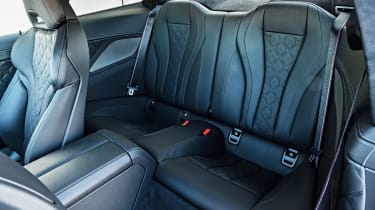 Front occupants also get plenty of space to stretch out, but it's a different story in the back. While there's a set of rear seats, rear legroom is almost non-existent and the sloping roof cuts into headroom, so it's best suited to kids. Storage cubbies are quite plentiful for such a sporting car, with places to put your phone, cup-holders and a decent glovebox.

Build quality is excellent and there's safety kit in abundance

Buying a BMW for £120,000 is likely to lead people to expect a great ownership experience, and the M8 Competition certainly feels like a high-quality product. Almost all of its interior, exterior and mechanical components feel beautifully made and finished, but recent BMW models have suffered from electronic gremlins, and it's in this area that the M8's complexity could possibly lead to issues - only time will tell. 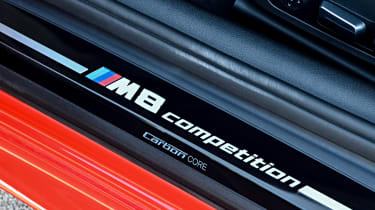 BMW has certainly left no base uncovered when it comes to safety, fitting its flagship sports model with the array of cameras, ultrasonic and radar sensors you'd once have found only in a fighter jet. It also gets an M-specific version of BMW's latest head-up display, with a wider viewing area and improved graphics.