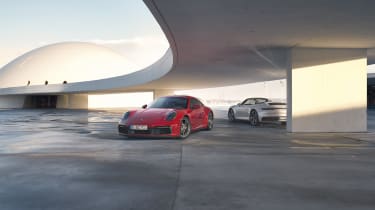 The 911 Carrera 4 uses the same 380bhp flat-six, twin-turbocharged 3.0-litre engine as the standard Carrera. This is paired with an eight-speed, dual-clutch automatic transmission that sends power to all four wheels. 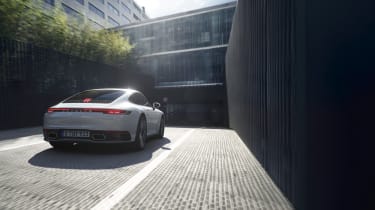 Both the Coupe and Cabriolet feature adjustable dampers and a limited-slip differential. The Carrera 4 sits on 19-inch wheels at the front and 20-inch versions at the back. Optional 20/21-inch wheels are available.

The four-wheel-drive system in the Carrera 4 includes the adoption of the latest “Traction Management” chassis control system, which Porsche claims offers more traction in snowy and wet conditions.

Every example of the 911 Carrera comes with a “Wet Mode” that detects when there’s water on the road and configures the car’s stability control, four-wheel drive system and anti-lock brakes accordingly.

With the exception of subtle new exhaust tips, the Carrera 4 looks almost identical to the rest of the 911 range. A pair of rectangular tailpipes are fitted to the Carrera 4 to differentiate it from the Carrera 4S, which has round ones.

The interior is largely unchanged from the entry-level 911 Carrera. The Carrera 4 uses the same sports seats, a 10.9-inch touch screen and a centrally positioned tachometer. There’s the same range of optional extras too, including adaptive sports seats (£2,315), carbon fibre interior trim (£1,263) and a premium Burmester sound system (£3,258).

Interested in the new 911? Read our reviews of the Porsche 911 Coupe and 911 Cabriolet.