2020 Porsche Taycan 4S has more range and a lower price 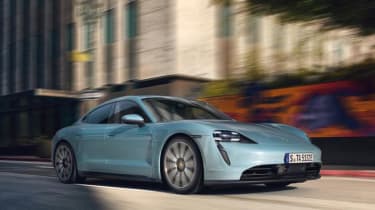 Porsche has introduced the Porsche Taycan 4S, the third version of the firm’s new electric four-door saloon that sits below the Turbo and Turbos S models. The 4S has less power but the longest range of the three Taycan variants, at 287 miles. The 4S costs £83,367 and is on sale in the UK now.

The dual-motor drivetrain from the Turbo and Turbo S models is used in the Taycan 4S but peak power has been capped at 523bhp, which is down from 617bhp in the more expensive models. The Taycan 4S will do 0-62mph in 4.0 seconds and go on to an electronically limited top speed of 155mph.

The Taycan 4S comes with a 79.2kWh battery as standard. It’s a smaller battery than those fitted to the Turbo cars and under WLTP conditions, Porsche claims it will return 252 miles of range. 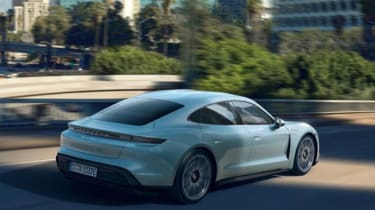 The Taycan 4S features a simpler exterior design with a new set of 19-inch wheels and less muscular front and rear bumpers. LED headlamps are standard and the interior remains largely unchanged, with standard leather seats and a 10.9-inch central infotainment screen.

The Porsche Taycan 4S can be ordered now and first deliveries will start in January 2020. The 4S starts at £83,637 before the Government's plug-in car grant is applied.

Interested in knowing more about the Porsche Taycan? Read our review for more information or compare the specs of the Turbo and Turbo S with the Tesla Model S.