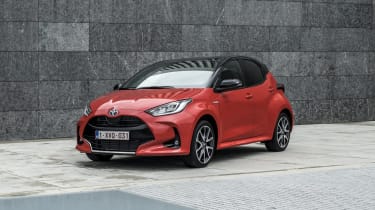 Toyota has revealed that the all-new Toyota Yaris supermini will start from £19,910. The fourth generation car is the first Yaris to use Toyota’s new TNGA platform, and will only be available as a 'self-charging' hybrid model.

When the new Yaris arrives in showrooms this September, the Japanese supermini will renew it's rivalry with the latest Ford Fiesta, Honda Jazz and Renault Clio, all of which now feature mild-hybrid and hybrid powertrains. 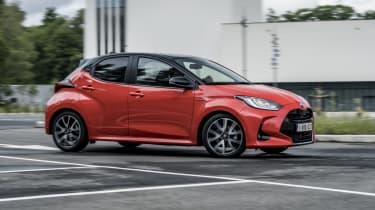 The new Yaris features a sharper looking design over the old car, particularly around the nose where there’s a new grille and headlights, but it’s still recognisably a Yaris. The car is lower and wider than the third generation model, as well as more sporty, thanks in part to flared wheel arches and the option of a two-tone styling with a black painted roof panel.

It sits on an adapted version of the ‘Toyota New Generation Architecture’ (TNGA) known as the GA-B platform, which was first used for the Toyota C-HR and then again for the RAV4 and Corolla models. Extra strengthening to the chassis of the Yaris means that the steering response is quicker than before, and suspension tweaks including softer springs, as well as a stronger body shell, mean that the ride quality should be more comfortable on rougher urban roads.

Despite being 3,940mm in length, the new Yaris is one of the smallest models in its class, being around 10cm shorter than key rivals like the SEAT Ibiza and Volkswagen Polo. Despite this, the wheelbase (the distance between the front and rear wheels) of the new Yaris is 55mm longer than the old car giving it a more spacious interior. 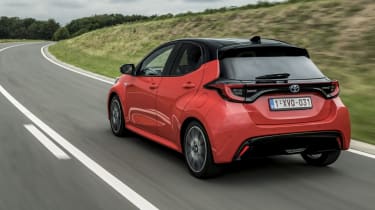 The new Yaris will only be available in the UK with a hybrid powertrain, consisting of a three-cylinder 1.5-litre petrol engine and an electric motor and battery. Toyota claims this system uses a lithium-ion battery pack that’s 27% lighter than before. It's capable of allowing the car to run on pure-electric power for 80% of the time when driving in town.

When combined, the petrol engine and electric motor produce a total power output of 114bhp. Power goes to the front wheels via a CVT automatic gearbox, with 0-62mph taking 9.7 seconds and a top speed of 109mph.

In the WLTP efficiency test, the new Yaris is capable of between 65.7 to 68.9mpg, and emits 92g/km to 98g/km of CO2 depending on its specification. 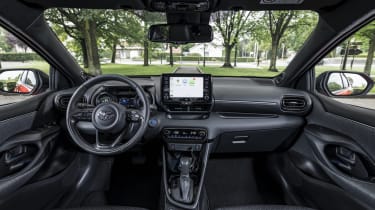 Inside, Toyota has given the new Yaris a 10-inch head-up display, as well as the world’s first centre airbags to be mounted on the inner edges of the front seats. The front seats are also mounted lower by 36mm, while the rear seating area is particularly packaged for children. The boot is 281 litres in size, which falls short of the Ford Fiesta (292 litres) and Renault Clio (391 litres). 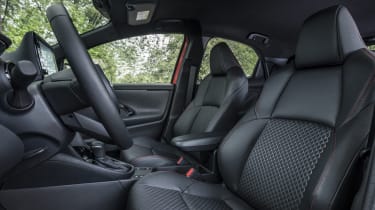 The range-topping Excel starts from £22,220 and gets an array of additional features including rear parking sensors, blind-spot monitoring and folding side mirrors. Buyers can also spec the optional Tech package for £825, which brings a JBL premium stereo system, a 10-inch colour head-up display and an auto-dimming rear-view mirror.

A Launch Edition of the new Yaris is slated to arrive in September; starting from £24,005. It includes a two-tone paint finish with red bodywork and a pearlescent black roof. Further additions include blue ambient interior lighting, the head-up colour display and an auto-dimming rear-view mirror.

Read our review of the current third generation Toyota Yaris Hybrid, or see where the Yaris features on our list of best reliable small cars.