A fully electric version of the Volvo XC40 SUV has been launched, but how does it compare to the class-leading Kia e-Niro? 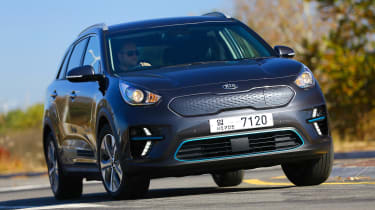 The Kia e-Niro is a highly impressive electric car, especially considering it’s the Korean brand’s first attempt at an EV. Offering 282 miles of range on a charge, it’s a leader in the electric SUV class. Now, it has a new electrified rival with the launch of the Volvo XC40 Recharge.

On paper, both cars appear to be closely matched with the range-topping e-Niro capable of 282 miles of driving range, beating the XC40 Recharge which can cover 248 miles before requiring a charging station. With a price set to be higher than the regular model, the XC40 Recharge will sit on its own for the time being; prices haven’t been revealed yet, but it’ll be more expensive than the e-Niro but far cheaper than premium electric SUVs like the Audi e-tron, Mercedes EQC and Jaguar I-Pace.

The introduction of the electric XC40 signals the start of a new sub-brand for Volvo, which will include all its electric and plug-in hybrid models. Buyers can also expect more electric SUV models to arrive within the next few years as customer demand increases. An example of this is the Hyundai Kona Electric, which has a year-long waiting list - a trend that could continue as more models become available.

Here, we compare these two EVs to see which is best. 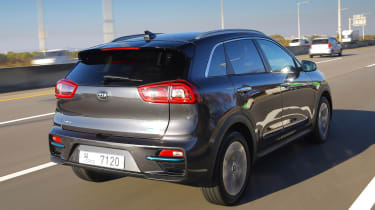 The Volvo XC40 Recharge brings subtle styling changes, including a blanked-out body-coloured grille insert, ‘Recharge’ branding on the black rear windscreen pillars, and unique alloy wheels. You’ll notice the changes if the two cars are parked side-by-side, but the overall effect is subtle enough to appeal to buyers who want an electric car with similar styling to a conventional petrol or diesel model. That being said, the XC40 is an eye-catching SUV anyway, with its distinctive LED headlights and tail-lights and its rugged boxy shape.

Kia has given the e-Niro similarly subtle design alterations. Besides a blank grille (housing the charging port) and a smattering of blue accents around the bodywork, the e-Niro is nearly identical to the hybrid models. Both these cars have smooth rear bumpers and lashings of chrome trim, highlighting the lack of an engine and the range-topping status brought on by their higher price tags.

While more expensive Volvos might come with a bigger sweep of plush materials, all models share the same design - so the XC40 feels almost as elegant and luxurious as the larger Volvo XC90. The XC40 has a far more minimalist feel than the e-Niro’s as most of the functions are controlled via the large portrait touchscreen. Incidentally, the Recharge model comes with a new Android-powered infotainment system, which can plot nearby charging points via the sat nav system. Full specifications for the electric XC40 haven’t been revealed yet, but judging by the standard car, the Recharge will feature LED headlights, two-zone climate control, parking sensors and a digital instrument cluster.

If you’ve sat in a hybrid Niro - or even a Sportage or a Ceed - the Kia e-Niro’s interior will be instantly familiar. While it’s slightly unimaginative, it makes electric cars feel more normal. One noticeable change is the new rotary drive selector, which replaces the more conventional gear lever, and frees up a lot of space for an extra storage cubby in the process. The initial batch of cars are high-specced First Edition models, with a huge array of standard kit like heated leather seats, a JBL stereo system, lane-keep assist, wireless phone charging and a reversing camera.

The Volvo’s boxy shape is excellent for passenger space, and the Recharge could improve this without the need for a conventional engine and gearbox, which can reduce cabin and rear seat space. Going electric will still mean plenty of legroom and headroom for those in the other seats. Volvo has redesigned the rear underpinnings for the electric version, to make sure that boot space isn’t massively compromised by the rows of batteries. There’ll also be a dedicated space to stow away the charging cable when you’re not using it. The standard XC40 offers 460 litres of boot space, so we expect a similar figure for the Recharge. As there’s no engine under the bonnet, extra storage space is freed up and the XC40 Recharge will have a front trunk like the Tesla Model 3. 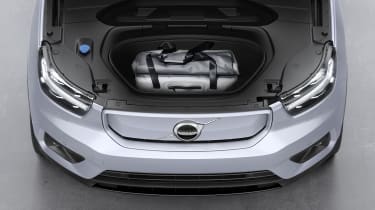 Electric cars tend to have slightly smaller boot spaces than the conventionally fuelled cars they’re based on, due to the extra space needed to house all the batteries. Although the Niro was developed to be a hybrid, it’s still surprising that the e-Niro offers a larger boot than this model. You get 451 litres in the e-Niro, and 382 in the other versions. It also has plenty of space for five passengers, good all-round visibility and a slightly raised driving position. Having that extra storage cubby between the front seats means there are even more places to stash essential travel items. Unlike the hybrid models, the e-Niro is not available with a towbar.

These cars are aimed at lifestyle-conscious buyers who want to make the switch to electric power, so it’s right that both are crammed full of the latest technology and equipment. The Volvo comes with an Android infotainment system that’s new for the Recharge model, and it allows you to control your navigation, media, phone book, car settings, climate settings and much more. There’s also a digital instrument cluster with extra driving information such as how many miles of range you have remaining. 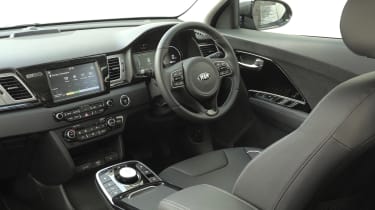 All Niro models are very well-equipped, and the First Edition e-Niro models adds to this specification with an upgraded JBL stereo system, DAB radio, sat nav, a digital instrument cluster, parking assistance, keyless entry and heated front seats. However, considering it’s based on the top-level ‘4’ trim, the e-Niro does miss out on some niceties that you’d get in other models in the Niro range. Cruise control, dual-zone air conditioning, the larger touchscreen and LED headlights are all omitted.

Neither of these electric models have been tested by Euro NCAP yet, but both the Volvo XC40 and Kia e-Niro picked up five-star ratings, so we’d expect the EV versions to be just as safe. In fact, Volvo says the Recharge will be one of the safest cars on the road, despite the company having to completely redesign the front crash structure to make up for the omission of a conventional engine. The front grille contains all the sensors and technology for the Advanced Driver Assistance System (ADAS), which makes its debut here. As well as providing preventative crash protection, it also allows for potential self-driving capability in the future. 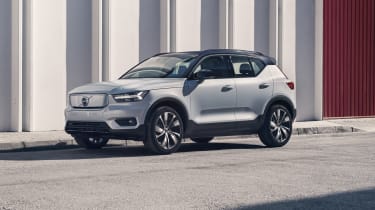 The Kia Niro gets a Euro NCAP five-star rating if you spec the optional safety pack; otherwise it gets a four-star rating. But, on the First Edition cars, the e-Niro features plenty of safety kit as standard, including automatic emergency braking, lane-keeping assistance and adaptive cruise control, which maintains a set distance from the car in front.

The electric Volvo XC40 is easily the most powerful model offered. A 78kWh battery and two electric motors produce the equivalent of 402bhp and a huge torque figure, enabling a 0-62mph time of just 4.9 seconds. The quickest petrol and the plug-in hybrid model both take at least 1.5 seconds longer to complete the sprint. Volvo has positioned the electric motors on each axle, so the XC40 Recharge is four-wheel-drive. 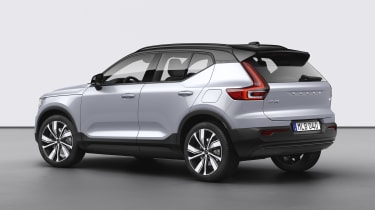 You’ll be able to cover 248 miles between full charges, which isn’t quite as much as the e-Niro but is still a decent figure. Volvo offers an 11kW wallbox home charger, which completely recharges the battery in under eight hours. Or, find a vacant 150kW charger on the motorway network, and you’ll be able to top up the battery to 80% in 40 minutes.

With the equivalent of 201bhp, the e-Niro is half as powerful as the XC40 but still quick enough for the vast majority of buyers. Accelerating from 0-62mph takes 7.5 seconds, compared to 11.1 seconds for the hybrid and 10.4 seconds for the PHEV version. Its top speed is 104mph, which sits between the top speeds for the other models.

More impressive is the e-Niro’s range. Despite costing half as much as a Mercedes EQC, the Kia is capable of a similar driving range. Kia claims 282 miles, but you can eke over 300 miles out of a charge in perfect conditions. Find a 50kW or 100kW DC fast charger, and you can replenish the battery to 80% capacity in 1hr 15 minutes/ 54 minutes respectively, or it’ll take almost 10 hours on a 7.2kW wallbox. If you’re stuck with just a standard three-pin 230V socket, you’ll need to wait for 29 hours before its fully charged.

For a majority of potential buyers, the price will be an important factor when deciding between these two cars. We expect the Volvo XC40 Recharge to be much costlier than even the T5 plug-in hybrid model, which starts at over £40,000. This will put it out of reach of many buyers and, even though the Kia e-Niro is more expensive than the plug-in and hybrid models, it’s a little more attainable. Both have positives - the XC40 offers a little more passenger space and an upmarket interior (not to mention sports car-shaming pace), but the e-Niro offers a longer range and a seven-year warranty. The Volvo just about scrapes it in this comparison, but there are many reasons why we think the Kia is one of the best electric cars you can currently buy.

Read our guide to the cheapest electric cars on sale if you’re considering switching to an EV on a tighter budget.