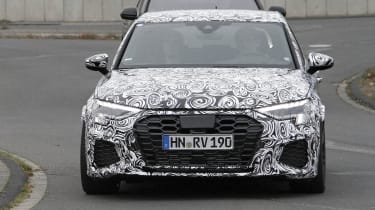 The forthcoming Audi RS3 has been spotted testing again, this time in saloon guise. We’ve previously seen the RS3 hatchback in development, and both versions will feature the same styling upgrades over the standard Audi A3. Power will increase over the outgoing model to compete more closely with the 415bhp Mercedes-AMG A45 S, and prices will reflect that - the new RS3 is likely to cost almost £50,000.

The 2020 Audi A3 on which the RS3 will be based was only recently unveiled but Audi is already working on the much more powerful version. At first glance the design looks quite subtle but through the camouflage we can see slightly swollen wheel arches and a more prominent roof spoiler for the hatchback. There are other telltale signs that this is the RS3 - the aerodynamic rear bumper features two big oval exhaust pipes, the grille has a different mesh design and the body kit is more aggressive than you’d expect of the standard car. The front air intakes, alloy wheels and brakes will all be much bigger than those fitted to the A3.

Not only will you be able to choose between saloon or hatchback, but there’s likely to be a choice of specifications too. Judging by the Audi RS Q3 SUV, we expect a base version to be joined by Sport Edition and Vorsprung models, with increasing levels of equipment. The mid-range model may have tinted, upgraded LED headlights, a panoramic sunroof and a sports exhaust, while the Vorsprung trim has featured carbon-fibre touches, an upgraded sound system and a Driver Assistance pack elsewhere in the Audi range. 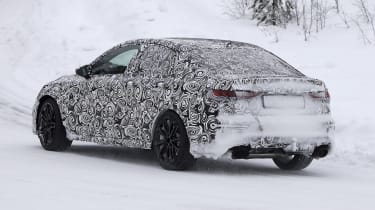 Rumours suggest the 2021 Audi RS3 may stick with the 2.5-litre five-cylinder turbocharged engine fitted to the current car. It’ll be tweaked to improve performance and efficiency, and may include a mild-hybrid system to allow the engine to shut down when coasting. This would follow more powerful RS cars like the new Audi RS7. Once again, Audi’s quattro all-wheel-drive system and an automatic gearbox will be fitted as standard.

The current RS3 has just under 400bhp but we expect the new version to have well over that. For the past few years, Audi and Mercedes have fought to have the most powerful hot hatchback on sale, and the 415bhp Mercedes-AMG A45 S currently wears the crown. As a result, the new RS3 is likely to have even more power. Its 0-62mph time will be reduced by a couple of tenths of a second as a result, bringing it below four seconds.

Inside, almost everything has changed from the previous A3. There’s a 10.1-inch touchscreen mounted in the dashboard that’s slanted towards the driver, Audi’s Virtual Cockpit is fitted as standard and most parts have been redesigned from the old A3.

The RS3’s interior will be marked out from the standard A3 with Alcantara suede-like upholstery, red contrasting stitching, specific RS graphics for the two screens and aluminium pedals. As for optional extras, we expect the brochure to include a sports exhaust and adaptive suspension.

Read our review of the current Audi RS3, or see where it features on our list of the fastest hot hatchbacks on sale right now. 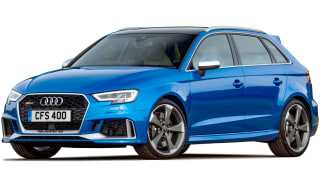