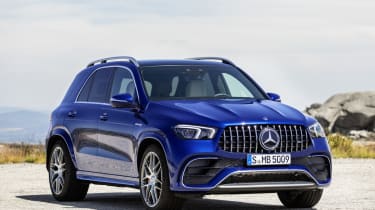 This is the 2020 Mercedes-AMG GLE 63 S, a 604bhp range-topping performance SUV that will rival the BMW X5 M Competition, Lamborghini Urus and the Porsche Cayenne Turbo. Prices have yet to be confirmed, but when the car arrives in UK showrooms next year, buyers will only be able to specify the more powerful ‘S’ model.

Mercedes has fitted its twin-turbocharged 4.0-litre V8 petrol engine to the GLE 63 S, which produces 604bhp. Power is sent to all four wheels via a nine-speed automatic gearbox, with 0-62mph possible in 3.8 seconds and a top speed of 174mph.

All of the best supercars you can buy now

This powertrain has been combined with Mercedes’ EQ Boost belt-driven starter-alternator and 48-volt mild-hybrid system. This setup is capable of generating an additional 22bhp. The engine has been made more efficient with cylinder shut-down technology, which can deactivate half of the cylinders in ‘Comfort’ mode at lower speeds to help reduce fuel consumption. 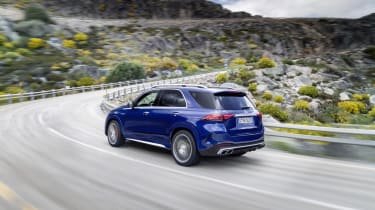 This mild-hybrid system helps drive the GLE 63 S at lower speeds and restarts the engine after every start/stop cycle. Mercedes-AMG claims this setup can return a fuel economy figure of 24.5mpg, with CO2 emissions of 262g/km.

The standard GLE 63 model, which will not be sold in the UK, is powered by the same mild-hybrid V8 powertrain but with 563bhp. As a result, 0-62mph takes four seconds and the top speed is ‘only’ 155mph.

Mercedes has also upgraded the GLE’s brakes to cope with the extra power, with larger brake discs and six-piston front brake calipers to increase stopping power. The SUV’s handling has also been sharpened with a revised electromechanical power steering rack, adaptive air suspension and an electronic limited-slip differential on the rear axle. 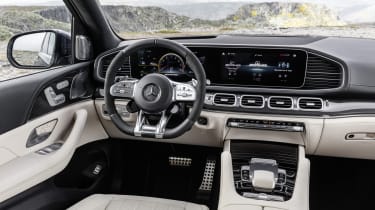 All GLE 63s get seven driving modes, ranging from “Comfort” to “Race” for normal road use, and “Trail” and “Sand” modes that raise the car’s ride height by 55mm while adapting the engine’s power delivery and four-wheel-drive system for rougher terrain.

Externally, the Mercedes-AMG 63 S appears broadly similar to the standard SUV, with only the aggressively styled front and rear bumpers, flared wheel arches, side skirts and revised radiator grille hinting at its performance. Inside, the changes are similarly subtle, with AMG-badged sports seats and carbon fibre interior trim. Dual 12.3-inch infotainment screens also feature, along with AMG-specific menus.

Do you want to know more about Mercedes-AMG’s model range? Why not read our reviews of the GLC 63 Coupe SUV and the E63 saloon.