"Blisteringly fast and hard to miss, the Mercedes-AMG GLC 63 Coupe is beaten by few SUVs for speed or style" 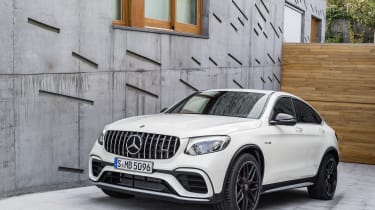 The Mercedes-AMG GLC 63 Coupe is a slightly more glamorous sister to the regular GLC 63. Both cars use the same muscular engine and gearbox as the C63 saloon to startling effect, while a swoopy roofline adds to the Coupe's visual appeal.

While you might expect that to make it a motoring rarity, it actually has a number of rivals, like the Alfa Romeo Stelvio Quadrifoglio and Jaguar F-Pace SVR, along with the BMW X4M and Porsche Macan.

The 4.0-litre, twin-turbocharged V8 engine comes in a choice of power outputs – 469 or a 503bhp version badged 'S'. Either is enough for truly eye-watering performance, but the more powerful engine of the GLC 63 S will take you from 0-62mph in a scorching 3.8 seconds. Such power is useless if it can't be deployed, though, and a 4MATIC+ four-wheel-drive system ensures that every single horsepower can be enjoyed, while the body is far less prone to leaning in corners than more prosaic SUVs and the regular GLC. 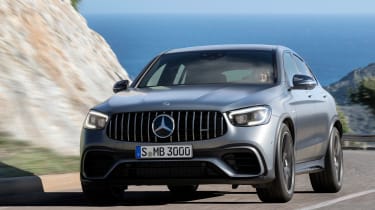 The price might take your breath away, too, being as it is slightly higher than the most powerful Porsche Macan. However, it does come pretty lavishly equipped, with all you could want from sat nav and leather sports seats to the high-performance brakes and sports suspension needed to keep all that power under control. Quality is high, too: the GLC has one of the most attractive interiors of any SUV of this size. Add a little bit of AMG garnish and it really comes to life. A facelift for 2019 saw it subtly upgraded too, with exterior and interior tweaks to ensure it has the latest features like Mercedes' MBUX infotainment system.

Either version of the GLC 63 Coupe will be expensive to run – fuel costs are only the start of a very pricey story. Mercedes reliability isn't beyond criticism, either, as the brand with the three-pointed-star finished in a disappointing 26th place out of 30 manufacturers covered in our 2019 Driver Power owner satisfaction survey.

Despite not being quite as fast, the Porsche Macan Turbo feels sharper and more exciting than the Mercedes, and we rate it as a better all-round package. Nevertheless, the Mercedes-AMG GLC 63 Coupe is still a hugely desirable car, and one whose image, street presence, style and performance are enough for many to justify its high running costs.

Both models are costly to run, insure and maintain

The Mercedes-AMG GLC 63 Coupe will only manage 22.6mpg at the very most, and when it comes to running costs, that's about as good as the news gets. In the more powerful GLC 63 S, you'll see no more than 22.1mpg. CO2 emissions of at least 275g/km mean those who run a GLC 63 as a company car will be liable for the highest Benefit-in-Kind tax.

It's worth remembering, too, that these figures are achieved in strict laboratory conditions. Succumb to the temptation of using all that power often and your fuel economy will tumble still further. 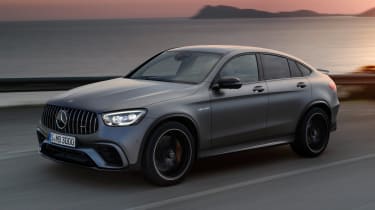 Yearly road tax will cost £465 until the car's sixth birthday, after which it drops to £145 a year. However, group 50 insurance is likely to prove pricey to most motorists, particularly if you live in an urban area. It's definitely worth seeking a quote before you make a decision to buy.

Bear in mind that other running costs are likely to increase as the car gets older. Mercedes offers AMG service plans, which take some of the sting out of scheduled maintenance costs, but occasional costs such as brake replacement and new tyres can be very expensive.

Mercedes provides a three-year/unlimited-mileage warranty with every new car sold in the UK.

Grips and goes like anything, but not exactly light on its feet

Although there's no doubt that this fastest GLC Coupe looks the part, the AMG experience really begins when you turn the key and that 4.0-litre twin-turbo V8 bursts into life. In fact, the great roar that erupts from the exhaust is programmed to be there, just to add to the sense of drama. An optional (£1,000) sports exhaust makes it all the more visceral.

The engine is good for 469bhp and a four-second 0-62mph time, but those for whom entry-level isn't an option can plump for the 503bhp GLC 63 S. Its extra power brings that acceleration time down to 3.8 seconds, while the standard AMG Driver's Pack (optional on the 'basic' model) increases top speed to 174mph and includes a driver training course. 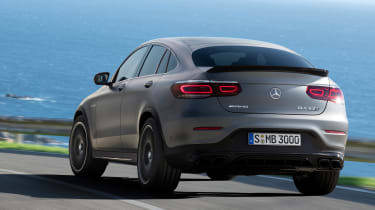 This is enough performance to leave even the fastest Porsche Macan in the rear-view mirror, but the tables are turned if the roads get twisty. This isn't to say the Mercedes can't cope in corners, though – special AMG-tuned suspension keeps body lean at bay, there's huge grip from the immense tyres on those 20-inch wheels and 4MATIC+ four-wheel drive ensures that loose and uneven surfaces don't upset the power delivery. The Coupe feels ever-so-slightly more sure-footed than the SUV, too.

It's just that the Porsche Macan seems less obviously bound by the laws of physics and feels more fluent and poised in corners; you can drive it quickly with greater confidence than the Mercedes. The latter's tyres are also rather prone to wandering on rutted road surfaces, but the facelifted model's nine-speed automatic gearbox has been reprogrammed, and is no less reluctant to change down through multiple gears.

GLC 63 Coupe drivers will enjoy themselves, thanks to razor-sharp steering and – of course – that incredible power. And that noise never subsides, even when traveling at more modest speeds. The AMG's muscle-car roar is intoxicating and encourages mischief among even the most reserved.

Great quality, looks and technology are close to class best

The Mercedes-AMG GLC 63 Coupe was not a car designed with effortless comfort in mind, despite its lavishly furnished interior. Tyre, engine and wind noise are all reasonably muted – unless you put your foot down hard – but the ride remains resolutely firm and fidgety at anything below a fast cruising speed.

The next model down in the hierarchy is the Mercedes-AMG GLC 43 Coupe, which we've reviewed alongside the more economical petrol and diesel models that make up the bulk of the range. The V8-powered '63' is little different from the V6-engined '43' inside, with the same rather masculine look to its leather-lined interior. Trim options abound, though, and you can choose to swap the standard silver panelling for wood or carbon-fibre finishes if those are more to your taste. Decoration aside, few will find much to fault in the way the GLC is constructed and finished inside. 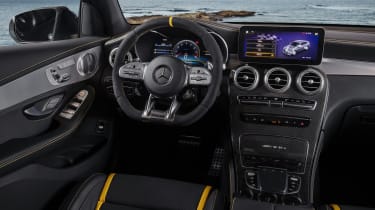 Although wandering fingers might find a few sharp edges on hidden parts, the build is generally on par with the Audi Q5, although the Volvo XC60 has it beaten for sheer style. The Mercedes is far from ugly inside, though, and its smart cast-metal air vents and sleek centre console are arguably more attractive than the more conventional-looking Audi's.

There's tons of standard equipment, too, including a Mercedes' latest MBUX infotainment system that responds to "Hey Mercedes" voice commands, dual-zone climate control and power-adjustable heated leather seats. The GLC 63 also distinguishes itself from the GLC 43 with a flat-bottomed three-spoke steering wheel. The 63 is set apart from the 43 outside, too, by the 'Panamerica' front grille treatment as seen on the range topping Mercedes-AMG GT sports car.

Reliability is a worry but there are no doubts on safety

The GLC 63 Coupe offers much the same interior space as the regular Mercedes GLC range, with a few caveats. There's plenty of room for the driver, both when relaxing and when putting a bit more effort through the wheel. Due to the kind of car this is, the driving position is on the high side, but this means you get a great view of the road ahead, which can be handy when planning your route through corners.

We found the standard seats a little flat and lacking in back support, but you can upgrade to 'Performance' seats with pneumatically adjustable bolsters and cushion adjustment, or get them as standard on the 63 S. 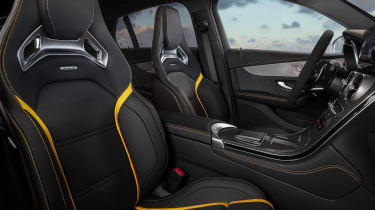 The centre rear seat occupant might complain of a lack of legroom due to the bulky tunnel through which power passes to the rear wheels. The neighbouring passengers have plenty of room, although the curvaceous roofline of the GLC Coupe may brush taller people's heads. There's a generous array of cubby holes and door bins big enough for bottles, while the two rear seats get a cup-holder each when the centre seat isn't in use.

The Coupe's 500-litre boot is 50 litres down on the SUV's, but still equals the Porsche Macan's capacity. There's 1,400 litres of load space with the seats down, too, but the regular-shaped model has 200 litres more.

Reliability remains to be proven, but there are no doubts on safety

The GLC came 61st overall in our 2019 Driver Power results but a worrying 44% of owners told us they'd experienced one or more faults, from the engine to the electrics and interior, within the first year. We hope Mercedes can solve these issues out quickly because customers also told us they love the brand’s engines and gearboxes, along with its safety credentials. 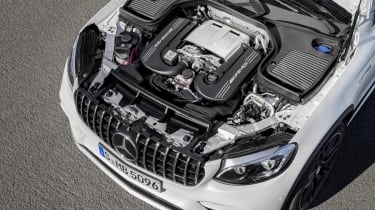 These are backed up by a full five-star Euro NCAP result awarded after independent crash tests in 2017, albeit tested in SUV form. While it put up a strong showing for adult and child occupant protection, it also features systems such as autonomous emergency braking to reduce the likelihood of a crash happening in the first place. You can add more with a driving assistance package, which includes lane-keeping assistance and active cruise control with steering assistance. There's also an active bonnet, which pops up to reduce injury if you strike a pedestrian.