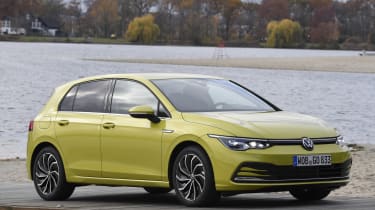 For more than four decades, the Volkswagen Golf has been a cornerstone of the family hatchback market in the UK. During this time, the Golf has been improved and updated with each new generation. Now the 2020 Volkswagen Golf is here, and we’ve had a first drive of what is the eighth-gen model.

The Golf has continued its evolution from the Mk7 by remaining on the VW Group’s MQB platform. This means some of the vital components under the metal are virtually unchanged, with the dimensions of the new Golf almost identical to those of the previous model. Despite some similarities, the new design is more than a facelift; several important elements of the car have been totally overhauled. 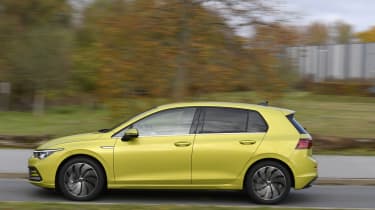 The profile of the new Golf may be virtually identical to that of the outgoing car but the front is where there have been some noticeable changes, thanks to a new face that incorporates an LED light bar and LED headlights across the range. At the back, a revised tailgate design and restyled LED tail-lights modernise the Golf without massively changing it.

The biggest change from the previous Golf is the car’s engine range, with electrification now a core feature. A plug-in hybrid GTE model is confirmed and several models in the range get a 48-volt mild-hybrid setup.

Essentially a starter-generator that recovers energy lost when braking, the mild-hybrid system converts the energy normally lost when braking into an electrical ‘boost’ of up to 16bhp to assist the engine when accelerating, helping to increase fuel economy while reducing emissions. This system has been designed to work with VW’s DSG dual-clutch automatic gearbox, so is not available on the base 89bhp 1.0-litre petrol model, or any Golf with a manual gearbox. Pick the more powerful 1.0-litre or 1.5-litre petrol engines with automatic gearboxes, and they come with the mild-hybrid tech as standard. 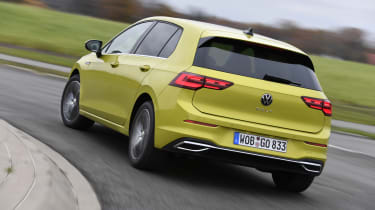 Our first drive was in the turbocharged 1.5-litre four-cylinder petrol engine, badged as an eTSI. This powertrain produces 148bhp and sends its power to the front wheels via a seven-speed DSG automatic gearbox. Zero-62mph takes 8.5 seconds and the car’s top speed is 139mph.

When pulling away, the 48-volt electric mild-hybrid system gives noticeably improved low-down performance. The four-cylinder petrol engine and electric starter-generator work together very well, too; the startup of the engine is impressively smooth and it’s barely noticeable on the move.

At normal speeds, the engine quickly switches into two-cylinder mode when cruising and switches itself off completely when the car is coasting. Again, this process is very refined - if it wasn’t for an ‘Eco’ light on the digital dial display, it’s unlikely you’d notice. When you do require more acceleration, a press of the throttle smoothly starts the engine with barely any shudder at all.

Sadly, the seven-speed DSG automatic gearbox fails to match the smoothness of the engine, with a noticeable delay in selecting a lower gear if you demand more acceleration. The starter-generator does help in this regard, but it can’t disguise the fact that the gearbox gives the car a relaxed rather than eager feel. 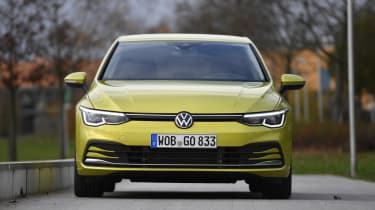 Our test car was equipped with adaptive dampers, giving the car a comfortable ride that isn’t troubled too much by the majority of road imperfections. Larger bumps did make it through to the cabin occasionally but this was likely down to our car’s 17-inch alloy wheels; smaller wheels and tyres should improve the ride further still.

At speed, the design of the new Golf helps to suppress wind noise, although tyre roar is noticeable and constant when driving. The engine, although quiet most of the time, can sound quite rough when engine revs go above 4,000rpm.

The new Golf feels composed in corners, with little body roll, largely thanks to a similar suspension configuration to the old model. The steering is accurate and direct, with about the right level of power assistance at speed. In comfort mode at lower speeds, the power assistance increases, making the steering feel too light and a bit vague. 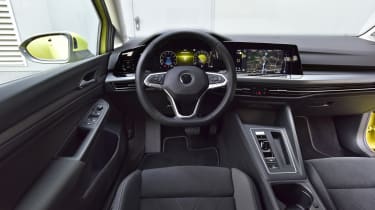 The cabin of the new Golf introduces sweeping changes. Several of the physical buttons are gone, with the car’s main functions now controlled by a large infotainment touchscreen, steering wheel buttons and voice commands. A swipe bar below the infotainment screen operates cabin temperatures and the audio volume, and it does take a little getting used to. Other useful additions include a sim-card, so your Golf is always online and updated, as well as Android Auto and Apple Carplay smartphone connectivity. Overall, cabin build quality is excellent, with the new design giving the interior a thoroughly modern feel.

Interior space remains broadly similar to the previous model, so there’s a decent amount of leg and headroom for rear passengers, which is helped by the car’s flat roofline.

VW engineers have hidden the lithium-ion battery pack used in the mild-hybrid system under the front passenger seat, so no boot space is sacrificed by the car’s electrification. This gives the new Golf 380 litres of boot space with the rear seats in place, and 1,237 litres with the seats folded flat. This is a decent storage figure that beats the rival Ford Focus by five litres but falls short of the huge 590 litres offered by the current Skoda Octavia. 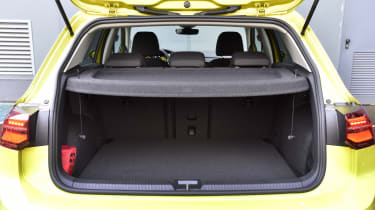 The Mk8 Golf has a new array of safety technology, including a driving assistant that can apply the brakes to bring the car to a halt if driver fatigue or ill health is detected.

VW has yet to announce UK specifications and pricing for the Golf but we’d expect the extra tech to raise the starting price significantly. An entry-level S model with smaller 16-inch alloy wheels, lower spec LED headlights and a simplified infotainment system will likely cost from around £22,000. Go for a higher specification model with a few options and the price could easily reach £30,000, a figure that puts the Golf into direct competition with the BMW 1 Series and Mercedes A-Class.

On the basis of this first drive, the new Golf feels like a sizeable step forward, with mild-hybrid technology seamlessly integrated into a relatively familiar but nicely modernised package. We’ll reserve full judgement until we’ve driven the car on UK roads and had more experience of the new cabin design. Our ultimate verdict will need to factor in UK prices and PCP finance numbers so we can see how the mk8 Golf is placed to compete with rival offerings in both the standard and premium hatchback market sectors.

Do you want to know more about the new 2020 Volkswagen Golf? Why not read our preview of the new Golf Mk8 and the new Golf GTI for everything you need to know.