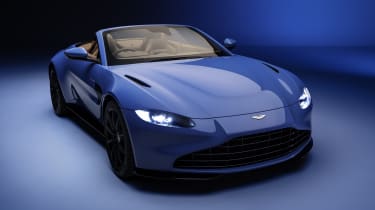 The new 2020 Aston Martin Vantage Roadster has been revealed. The new model will make its public debut in March at the Geneva Motor Show and cost £126,950 when it arrives in showrooms towards the end of the year.

It’s the latest convertible to join the Aston Martin line-up and will be a direct rival to the McLaren 570S Spider and Porsche 911 Cabriolet. The price announced means the Vantage Roadster costs around £12,000 more than the hard-top model.

According to Aston Martin, the Vantage Roadster’s electric roof system is faster than that of any other convertible currently on sale, taking just seven seconds to retract and fully stow away. The setup does affect boot space, with the Roadster only offering 200 litres of storage space compared to the 350 litres of the coupe.

The reveal of the Vantage Roadster marks the 70th anniversary of the car’s name. To celebrate this, buyers can now spec both the coupe and the Roadster with a unique ‘vane’ design front grille, which replaces the standard ‘hunter’-style grille design. A new range of optional alloy wheel designs are also available, along with new paint finishes. 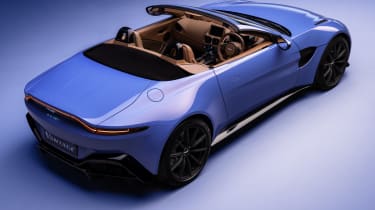 Both the Vantage coupe and Vantage Roadster share the same 4.0-litre twin-turbocharged V8 petrol engine, which is sourced from Mercedes-AMG. It develops 503bhp, sending power to the rear wheels via an eight-speed automatic gearbox. To compensate for the loss of the metal roof, the Roadster has been reengineered with additional chassis strengthening, gaining 60kg of additional weight over the coupe.

Performance is only minimally affected by the additional weight, with 0-62mph taking 3.8 seconds - just 0.2 seconds slower than the coupe. Claimed top speed is 190mph.

The Vantage Roadster carries over the chassis technology from the coupe including an electronic differential, adaptive suspension, dynamic torque vectoring and three individual drive modes called ‘Sport’, ‘Sport+’ and ‘Track’. The car’s chassis has been tweaked by Aston’s engineers to compensate for the loss of the roof. 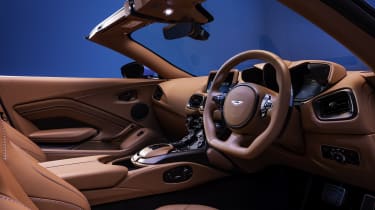 Inside, the interior of the Roadster is near-identical to that found in the coupe, with a two-seat layout and the same dashboard. The same eight-inch touchscreen infotainment screen also features, with sat nav, Bluetooth, iPod and iPhone connectivity and USB audio playback.

According to Aston Martin, the seven-speed ‘dogleg’ manual gearbox used in the hardcore Vantage AMR coupe will not be available in the Roadster.

Want to know more about the Aston Martin Vantage? Read our in-depth review for everything you need to know.