Like the next Jaguar XJ and Mercedes S-Class, the BMW 7 Series will be available as an EV 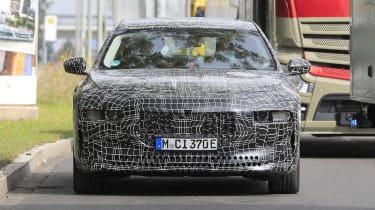 An electric version of the next BMW 7 Series has already been confirmed, and now a camouflaged prototype model has been spotted during its development phase. We expect the 7 Series EV to be called the BMW i7 and you’ll be able to order it in 2022. There’ll also be an electric Jaguar XJ, plus a Mercedes S-Class-sized car called the Mercedes EQS.

The prototype i7 looks to have low-set headlights, but it’s hard to know how much is hidden by the disguise. The next-generation 7 Series will have supersized grilles, although they’ll be blanked off on the i7. At the rear, the design looks more stepped than the current car. This prototype appears to be a long-wheelbase model, which will be sold alongside a standard version.

As BMW’s flagship saloon, the forthcoming 7 Series and i7 will be full of the manufacturer’s latest technology. One of the main focus areas will be autonomous driving, and we’d expect the i7 to feature enough gadgetry to be able to drive itself for long periods of time, where legal. This development mule looks to be adorned with an array of sensors and cameras. 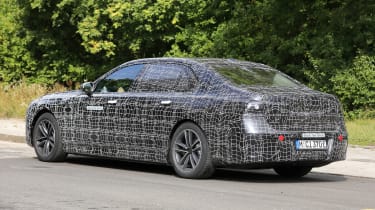 Buyers will be able to choose between a wide range of power options, including petrol or diesel with 48-volt mild-hybrid hardware, and a plug-in hybrid. The electric 7 Series will use BMW's fifth-generation eDrive technology, which will make its debut in the iX3 SUV this year. This integrates the electric motor, electronics and transmission into a single unit, reducing total weight and size.

Performance and battery details have yet to be released but to be competitive the 7 Series EV will need a range of at least 300 miles. The Tesla Model S currently offers a range of up to 379 miles. The iX3 has two electric motors that provide all-wheel drive and are linked to a 70kWh battery pack for an output of 532bhp and a range of up to 285 miles. Given that all the power in electric cars is available instantly, we expect the iX3 and the 7 Series to be blisteringly fast in a straight line.

The iX3's maximum range is on par with other luxury electric SUVs like the Audi e-tron, Jaguar I-Pace and Mercedes EQC. The Mercedes EQS, meanwhile, is said to be able to manage up to 434 miles on a single charge, so it’s likely that BMW will be aiming to get closer to this figure.

The BMW Group empire, which also includes MINI and Rolls-Royce, is planning to have 25 electrified models in its portfolio by 2023, cutting its average fleet emissions by over a third. Around half of these are expected to be fully electric models, with most cars designed to accommodate a range of powertrains.

Read our BMW 7 Series review and see where it places on our list of the best used luxury cars.