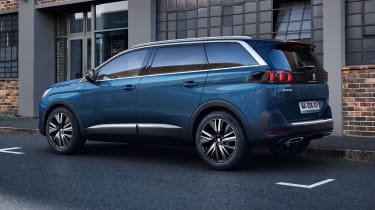 The Peugeot 5008 SUV has been given a midlife facelift that has added some extra luxury and updated technology, including Peugeot's latest i-Cockpit dashboard. Like the smaller Peugeot 3008, the car is now available to order, with deliveries starting early next year.

Interested buyers can place a reservation for the new 5008 now, with prices starting at £29,585. That buys you the Active Premium trim level with the 1.2-litre petrol engine. The entry-level 5008 packs equipment like front and rear parking sensors, two-zone air con and push-button start. It also gets a Safety pack and Visibility pack while, unlike some rivals, it comes with three rows of seats as standard.

Spending £31,435 gets you the Allure trim, which adds 18-inch alloy wheels (painted grey), roof rails, the Safety Pack Plus and a crisp 10-inch touchscreen with connected sat nav. Allure Premium adds keyless entry and ambient lighting, plus the Children’s Pack with window blinds and tray tables, for £550. 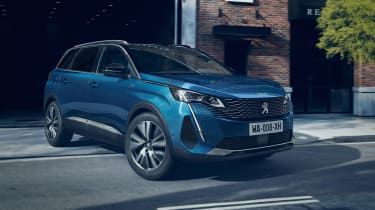 A sportier look awaits GT buyers, with the wheels and roof finished in black and full LED headlamps at the front. There’s also adaptive cruise control and a more luxurious upholstery finish, while GT Premium features a generous specification that includes an electric boot release, massaging front seats and automated parking assistance. GT (replacing GT Line) starts from £33,485 and GT Premium adds another £4,000 to the price.

Design changes include a new frameless front grille design, flanked by gloss black air intakes sitting above a skid plate-style trim. The updates should help to keep the 5008 fresh against rivals like the Skoda Kodiaq, Land Rover Discovery Sport and all-new Kia Sorento.

The headlights have also been resculpted for a more aggressive look, and now feature LED technology across the range, with 'hook-shaped' DRLs. Fog lights have also been scrapped in favour of a 'Foggy Mode' for the LED headlights, which reduces the intensity of the LED low beam when the rear fog light is activated.

The rear of the 5008 will gain new LED lighting, with Peugeot's signature '3D claw' design and scrolling indicators. Thanks to smoked glass covers they're designed to cohesively extend from the black boot lid, making the 5008 appear wider to anyone following. Two new colours will be offered, along with 19-inch 'diamond studded' alloy wheels for the GT trim level. Buyers will also be able to specify a Black Pack that sees chrome exterior trim replaced by black items.

Peugeot's i-Cockpit has been updated, with a new 12.3-inch digital panel that's said to have better definition and contrast. The 10-inch central infotainment display is also new, with seven piano-style keys giving direct access to important functions such as the climate control, radio and sat nav. It's compatible with Apple CarPlay and Android Auto and there are two new USB ports for second-row passengers to charge their devices. All 5008s with an automatic gearbox will also get Normal, Sport and Eco driving modes to choose between.

The updated 5008 also ushers in new driving aids, including Night Vision, which is unique in the class. With a range of 200-250 metres ahead of the vehicle, Peugeot claims it can detect pedestrians and animals beyond the reach of the high beam headlights, and its feed is displayed in the new i-Cockpit display. Adaptive cruise control that can stop and restart the 5008 (if it's stopped for no more than 3 seconds) will also be available in automatic versions. A new 515-watt Focal stereo upgrade will be available as an option. 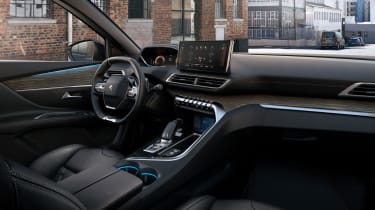 Read our in-depth review of the Peugeot 5008, along with our guide to the best family SUVs on sale now.