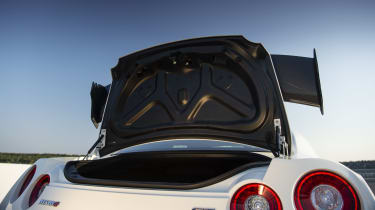 The GT-R’s suspension can be set in a softer Touring mode, which does make it more comfortable than in all-out Race mode, but it still can’t conceal the effect the car’s huge 20-inch wheels and low-profile tyres have on ride quality – very few bumps are completely absorbed by the springs and most pass directly through to the occupants.

Those wide tyres also kick up quite a din, much of which is transmitted inside. On the latest cars, Nissan has incorporated a sound-cancelling feature into the stereo and this does have some success in blocking the worst of the racket, but can’t overcome it fully. 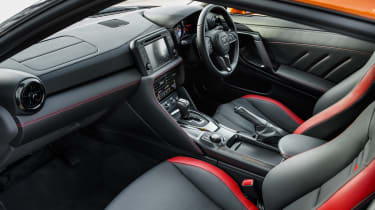 The GT-R isn’t a car that you or your passengers can lounge and luxuriate in. There’s enough space up front for a reasonable degree of freedom of movement when you’re belted in, but it’s a snug, enclosed environment, with relatively slim windows not allowing a huge amount of light in.

The Nissan has a pair of token rear seats. They’re fine for small children, but otherwise should be considered an extension of the luggage compartment, providing a bit more flexibility on long journeys. It should be remembered, though, that few cars with the GT-R’s performance even pretend to be able to carry more than two people.

Additional storage is provided by slim door pockets, a small glovebox and a compartment between the front seats – enough for a wallet and mobile phone.

The GT-R’s 315-litre boot is also impressively big for a supercar: it can accommodate a couple of suitcases or a set of golf clubs, with the vestigial rear seats serving as a luggage overflow area.

General visibility is decent from the driver’s seat, although the large turning circle means a three-point turn may become a five-point manoeuvre on all but the widest roads.