Beyond anything else, the GT-R is sold on its reputation for searing performance. Rumours of its astonishing capabilities spread like wildfire as soon as it first appeared in the UK, becoming a hot topic for discussion on internet forums. It was hailed as an instant legend, with a huge proportion of the hype coming from video-game aficionados.

The Gran Turismo and Forza Motorsport fans were proved right and the computer-game link was more than skin-deep. While a Ferrari carves a perfect line through corners by obediently following your instructions, the GT-R uses computer technology, raw power and a disregard for physics to achieve the same objectives. 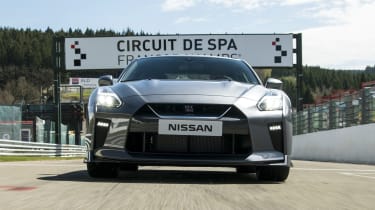 You don’t have to be a racing driver to have a good time behind the wheel of the GT-R. The driver aids are incredibly sophisticated and always on standby, looking after you without ever being too intrusive. The car works with you, sending power from the car's 3.8-litre twin-turbo V6 to whichever wheels have the most grip. It can also can brake wheels individually and adjust the suspension in whatever way is necessary to make sure the car gets around a corner – at seemingly whatever speed you ask it to. It’s worth keeping both hands firmly on the steering wheel, though, as mid-corner bumps can throw it off course.

At 1,753kg, the GT-R is heavy for a sports car and no amount of technology can mitigate something as fundamental as its weight. When you take a corner flat out on track or ask the car to change direction quickly, you feel the car fighting against its own mass to react as it should. While the steering is light and fast, and the four-wheel drive system generates immense amounts of grip, purists are unlikely to be impressed by this aspect of the GT-R's character.

Driving the GT-R is a very different experience to what you get in more conventional supercars. Although always working to your advantage, the clever technology that keeps the car on an even keel is always working away in the background. At low speeds, you may hear otherwise unexplainable clunks that aren’t concealed by the road noise that makes them vanish at higher velocities.

Opinion is divided, too, on exactly how rich the GT-R’s driving experience is - and not just because of its weight. While its ability to cover ground from point to point isn’t in doubt, there is an argument that the driver plays second fiddle to the computers. You can either feel – or tangibly imagine – your steering and throttle being processed by the computer before they’re obeyed by the car. This can lead to a sense of being isolated from the action and not as involved as you might be in a BMW M3 or Porsche 911.

Traditionalists might be put off, too, by the lack of a normal manual gearbox. In its place is a dual-clutch box with fully automatic or sequential manual operation, but it’s not quite as slick in operation as the one in the Audi R8. Nissan has worked to improve the smoothness of the GT-R's gearbox and in updated versions the difference is noticeable. Shifts between gears now happen with much less of a thump, especially between first and second, which makes trundling around in town much more bearable.

Earlier GT-Rs had a rather unpleasant, boomy exhaust note that proved tiresome on motorway jaunts, but the latest model has clever noise-cancelling technology built into the stereo system, which keeps some of the racket at bay. A titanium exhaust system was also added to improve the sound of the car but the GT-R is still far from a relaxed long distance cruiser. If exhaust noise is a problem, beware that the range-topping Nismo version is even louder than the standard car.

The Track Edition, with Nismo-derived suspension, is even more capable on smooth tarmac, making the standard car feel slightly soft in comparison. There's a huge sense of precision through the steering wheel but we expect it may prove too firm for daily driving on UK roads. 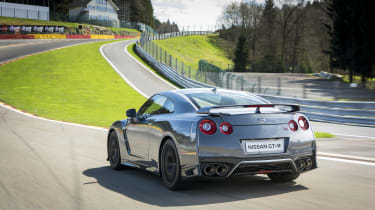 We’ve mentioned this car’s uncanny ability to make the most of the your inputs and corner with supernatural agility, but we haven’t yet discussed its power. The first versions of the GT-R to arrive in the UK had 473bhp – enough to make it devastatingly fast – and nobody complained about a lack of urgency.

The latest models, though, have 562bhp. It’s an enormous amount of power and thrusts the GT-R from 0-62mph in just 2.8 seconds, accelerative force that almost feels uncomfortable as you struggle to breathe while being pinned in your seat. It’s a thoroughly exhilarating experience, but by no means is it over by 62mph. If you’re somewhere where it’s safe and legal do so, you can keep accelerating until you reach 196mph, which doesn’t take very long at all – you’ll have reached 100mph in less than eight seconds.

If, somehow, you’re still not satisfied, a 592bhp Nismo version of the car is also available. It’s the fastest, most exciting, most expensive and most exclusive version of the GT-R ever produced, and an extra 30bhp is only one of the differences between it and the standard version. The car is 30kg lighter thanks to the use of carbon-fibre body parts and it also generates significantly more downforce to make it stick to the road in corners. It does this so effectively that its cornering ability at high speed is virtually unrecognisable next to the standard car.

The trade-off for the Nismo’s incredible handling ability is the ride, which feels firm on a smooth road even with the softest suspension setting, but can get extremely uncomfortable on a badly maintained or damaged surface.

The Nismo GT-R is so extremely quick that it can occasionally be a little intimidating; in the wet with the traction control turned off, it can spin its rear wheels in the first four gears despite being four-wheel drive. Those who want the ultimate GT-R experience will love the Nismo model, but it may scare them sometimes, too.