The GT-R is a rather different proposition to Ferraris and even BMWs – it’s the top model in a range that begins with tiny hatchbacks. Appropriately, then, owning a GT-R isn’t necessarily any more complicated than owning a Micra. The car comes with the same three-year/60,000 mile warranty as any other Nissan, for starters.

The GT-R also has a strong reputation for reliability – though its computer systems are extremely powerful, the mechanical package is surprisingly simple and robust. Of course, if you regularly take it on track to exploit it to its full potential, it’ll need more maintenance than if you drive it solely on the road.

Too few Nissan GT-R drivers have partaken in our annual Driver Power owner satisfaction survey for us to have in individually figures for it. However, Nissan customers in general are reasonably happy, placing the manufacturer 11th out of 30 brands. Disappointments included lacklustre performance and driving experience, which aren’t areas you need worry about with the GT-R.

However, Nissan owners do generally praise the low running costs of their cars – don’t expect the GT-R to delight you by being cheap to run. 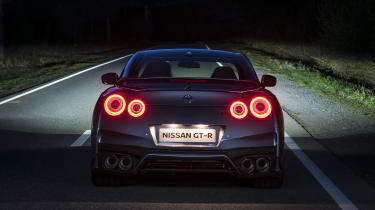 While it sells too few examples to have gone through Euro NCAP crash-testing, the GT-R has all the airbags and seatbelt pretensioners you’d expect of a modern, expensive car.

It also has a sophisticated four-wheel-drive setup and electronic stability control system that do their best to prevent you crashing in the first place. It’s worth mentioning that the many electronic driver-aids that the GT-R boasts have been developed with safety in mind as well as improving the car’s prowess on a race track.

Drivers will always be tempted to switch things like traction control off, preferring not to allow the electronics to have the upper hand. But on a car like the Nissan GT-R, it’s essential that these systems are left switched on, especially on public roads. Something with this much power demands careful driving, especially while you’re getting to grips with how everything works. Switching the safety systems off can give rise to some very unpredictable and dangerous behaviour.

The Nissan GT-R is a very sophisticated car and should provide a very safe, yet extremely rewarding driving experience. Treat it with respect and you’ll get all the more out of it.