The second-generation Nissan Juke is longer and wider than the first, resulting in more passenger and luggage space 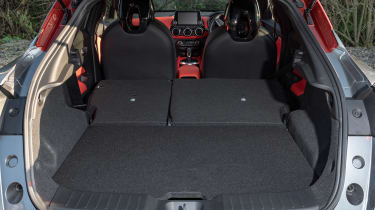 The latest Juke is bigger than its predecessor, coming in 35mm wider and 75mm longer. Crucially for its practicality, the wheelbase (the distance between the front and rear wheels) has also been lengthened by 105mm, giving interior space a real boost and putting the Juke on a par with other small SUVs.

How much space there is inside the car is important to buyers with families. Sitting in the back of the previous Juke was always rather cramped and claustrophobic, which is off-putting if you know you’ll regularly have people occupying the rear seats. Legroom and kneeroom in the new Juke are pretty good compared with rivals like the Peugeot 2008 and Hyundai Kona, and the rear doors are longer for easier access. Headroom and rear visibility could still be better, but both have been improved.

It's a similar story for the boot, because not only is luggage capacity of 422 litres competitive for its class, the hatchback opening is also much wider, making it easier to load awkward items like pushchairs. An adjustable boot floor adds some flexibility, but it does miss out on the sliding rear seat of rivals like the Citroen C3 Aircross, which can increase its boot to 520 litres.