Underpinnings shared with the Renault Clio result in tidy handling 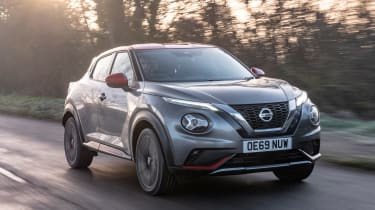 One criticism of the outgoing Juke was that while it looked funky, it was never particularly fun to drive. Nissan has sought to make it far sharper this time round, basing the car on the same underpinnings as the latest Renault Clio. In the crossover SUV class, handling like a supermini is no bad thing, and on this front the Juke scores highly.

There's not a huge amount of feel through the steering but its weight feels natural and its response helps the Juke feel agile without being too darty on the motorway. Body control is good too, with minimal body lean and a planted feel.

Bigger wheels tend to reduce the ride quality and increase road noise in many cars, and the same is true of the Juke in the higher Tekna and Tekna+ trim levels. The larger 19-inch wheels make the ride fidgety around town and unsettled at higher speeds, while wind noise is more noticeable. We think most people will prefer the Juke with smaller 17-inch alloy wheels, even if they don’t look as good.

For now, the Nissan Juke is available with just one petrol. Luckily the 1.0-litre DIG-T is a decent engine, which would likely be the top seller even if more choices were offered. Small and turbocharged, it feels modern and offers a good blend of performance and low running costs. Acceleration from 0-62mph isn't its strong point, taking 10.4 seconds, but in practice it feels more than sprightly enough for the Juke. There's an Eco driving mode that saves fuel but noticeably affects the car’ performance. 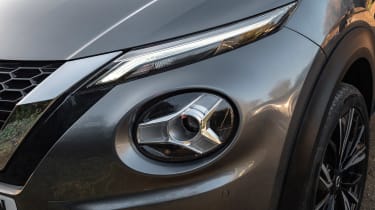 We weren't quite as enamoured with the six-speed manual gearbox, which we found fairly notchy compared with the sweet-shifting gearbox in the Mazda CX-30. It also emitted some transmission whine, which was noticeable while cruising on the motorway and was one of the few noises in an otherwise refined interior. We also had reservations about the seven-speed automatic gearbox, as although it improved in its Sport mode, it was occasionally jerky at slow speeds.