Neat, tidy handling and fun to be had, though engines don't sparkle

What does a car company do when its biggest European rivals have the upper hand by such a dominant degree when it comes to the engines and driving experience of their small cars? Sometimes it’s foolish to engage in a battle royale and, wisely, Nissan has chosen to make the Micra an appealing, enjoyable all-rounder instead of going for the Ford Fiesta’s handling crown outright.

The weight of the steering has been judged well – it’s light enough to make urban driving easy, but sufficiently stiff that the car doesn’t feet twitchy on faster roads. It doesn’t offer as much feel as that of the Ford Fiesta, though – and ultimately can’t provide as much fun. 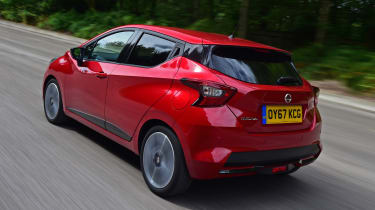 That’s not to say the Micra can’t corner with confidence, though, thanks in part to Nissan’s clever Active Ride Control and Active Trace Control systems. These work to help maintain your cornering line to remain stable at speed, by regulating the engine output and braking individual wheels where necessary. Our test car tracked accurately from one corner to the next, so on the basis that we couldn’t feel the system operating, it seems to work well.

Keeping things under such control means the suspension is quite firm. The result is a car that always lets you know when it passes over an imperfection in the road. We call it fidgety – the sensation that the car is never truly settled until it gets to higher speeds, which is a shame given that many cars of this type spend a high proportion of their lives doing short, local journeys.

However, it never becomes uncomfortable and isn’t significantly less relaxing than the previous Micra. We think it’s a compromise that was worth making for extra driving enjoyment and while the Fiesta and Ibiza needn’t worry about an upstart beating them for sheer driver appeal, many buyers will prefer the more easy-going attitude of the Micra.

Choose the 115bhp petrol engine for the best driving experience, not only because of its extra performance, but because the chassis has also been improved to keep up. The suspension is 10mm lower, and the steering has been upgraded, giving the Micra improved poise on country lanes.

The core of the Micra’s engine range is a new 1.0-litre petrol with three cylinders and a turbocharger that replaces the 0.9-litre Renault engine. It's available with 99bhp, getting the Micra from 0-62mph in 10.9 seconds. It's a more advanced engine than before, offering competitive performance.

We were impressed by the five-speed manual gearbox of our test car, too. It’s light and easy to use, with a very smooth shift action. On a car that needs frequent gearchanges to make swift progress, this is very good news. A CVT automatic gearbox is also available on this engine for extra cost, but we’d stick with the manual.

The DIG-T 117 has 115bhp and cuts the 0-62mph time by a further second, leading Nissan to bill this version of the Micra as a 'warm hatch'. In reality there are much faster versions of rival superminis, but the extra power and six-speed manual gearbox are welcome.

A 70bhp 1.0-litre non-turbocharged engine was previously available, but note this is slower, less efficient and less powerful than any other engine in the range. This engine allows Nissan to offer a more affordable Micra, but it’ll probably be rather more suited to life in urban environments than out on the open road. Accelerating from 0-62mph is best described as leisurely, taking 16.4 seconds - there aren’t too many cars that take longer.

An 89bhp 1.5-litre diesel engine was offered when the car was launched, but Nissan has told us that the Micra will now only be available with petrol engines. The diesel’s extra slug of pulling power made the Micra a nippier car to drive, but these cars are likely to need rather more frequent gearchanges, as all the engine’s power is delivered at low revs.