Generally inexpensive to run, but economy and emissions could be better

The Nissan Micra has earned a reputation as an easy-to-own car that’s cheap to run, hence its extraordinary popularity with driving schools, where it has to return a decent profit margin as well as being easy to drive. Nissan would have a riot on its hands if the new car failed to live up to its predecessor’s thriftiness. Fortunately, we don’t think it needs to send the troops in just yet.

The latest Micra uses economical engines with comparably low emissions ratings. Keeping the car fuelled, taxed and maintained should be relatively painless financially, so this is a high-scoring round for the Micra.

The two cheaper petrol engines (with 70 or 89bhp) aren’t currently available, although they may rejoin the range at a later date. Neither could post as good fuel economy figures as the two engines above, and the 70bhp non-turbocharged engine tended to feel underpowered when it reached a hill or motorway slip road. These engines were a little cheaper to insure, so it may be worth hunting out a used model if low premiums are a priority.

Those who want the 1.5-litre diesel will also have to turn to the second-hand market, as Nissan has confirmed that the Micra will only be available with petrol engines ‘for the foreseeable future.’ The diesel engine returned 52.3mpg on models with stop-start technology - barely better than the petrol engines, which are much less expensive to buy and insure.

Every Nissan Micra will cost £150 per year for road tax. 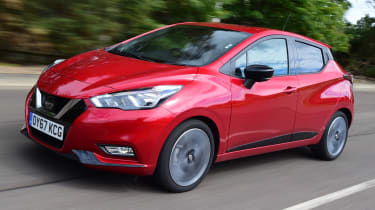 It’s a slight shame that the 70bhp ‘IG 71’ 1.0-litre engine isn’t currently on sale, as this engine occupied the lowest insurance group of all - group one. The now-entry-level 99bhp 1.0-litre turbocharged petrol falls into groups 8-9, while the more powerful 115bhp engine shouldn’t be too costly as it sits in group 11. For comparison, the Ford Fiesta occupies groups 5-15, so the Micra should cost a little less to uinsure.

One area in which Nissan does show a little complacency is its warranty. It’s a three-year/ 60,000-mile policy – fair enough, but beaten soundly by certain rivals. Hyundai and Kia offer five-year/unlimited-mileage and seven-year/100,000-mile policies respectively, and it’s not just the South Korean marques that are generous with their warranties.

Toyota is just as Japanese as Nissan and it offers a five-year/100,000-mile warranty, so it’s a shame Nissan doesn’t follow that lead. At least Nissan offers owners the opportunity to extend their warranty beyond its original end date at extra cost – although some claim exclusions can apply.

The Nissan Micra has always been the kind of car that becomes regarded as a household appliance. It just sits there quietly until called to perform and as such it needs to be cheap and convenient to maintain. That should be the case with the latest model, which needs just a service every year. For specific information on servicing costs, consult your Nissan dealer.