The Renault Twingo uses a range of smaller engines than the previous model for better economy and lower emissions. Its low weight helps, too.

The Dynamique SCe 70 model with stop-start technology (which turns the engine off when the car is stationary) uses a 1.0-litre petrol engine, returns 67.3mpg economy and emits 95g/km of CO2. The Expression SCe 70 and Play SCe 70 models use the same engine but do without stop-start, so they return slightly poorer figures of 56.5mpg economy and 112g/km CO2 emissions, meaning a slight increase in first-year road tax (from £120 to £140). 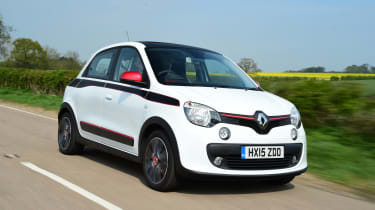 The range-topping Dynamique TCe 90 model uses a 0.9-litre turbocharged petrol engine for extra speed, but it's also impressively economical. Despite being one of the faster cars in the Twingo lineup, it's capable of 65.7mpg and CO2 emissions of 99g/km. Meanwhile, the most powerful GT version of the Twingo gets a 109bhp version of this engine that will return 54.3mpg and emits 115g/km. Even this sportiest of Twingos will cost just £160 to tax in the first year.

All Twingo models will cost £140 a year to tax after their CO2-weighted first-year bill (usually included in the on-the-road price).

The Twingo is covered by a three-year/60,000 mile warranty, which also includes UK roadside assistance. This can be extended into a fourth year, but this costs extra. Surprisingly, Renault shortened its standard warranty at the start of 2018, despite rivals like Hyundai and Kia providing five and seven years of cover respectively.

Renault offers affordable service plans for all its cars. Its EasyLife Pack covers servicing for three years for £100, and is transferrable if you sell the car. Increasing servicing and the warranty to include the fourth year sees prices shoot up, however, to £400.