Renault Twingo is very good in town, but not as much fun to drive as rivals

The problem for Renault is other cars in this class manage to be more than just competent city cars – the Skoda Citigo, Volkswagen up! and Hyundai i10 are also remarkably good fun to drive, offering more grip and more enjoyable handling than the Twingo. Sadly, although the GT is an improvement, it won’t have you searching for ever-more challenging corners like other Renaultsport-developed hatchbacks.

With its rear-wheel drive and very low weight, we hoped that the Twingo would be really fun to drive, but in some ways its layout actually works against it. The lack of weight over the front means it doesn’t turn into corners as sharply as its front-wheel-drive rivals, and the light, spongy steering does little to communicate what’s happening between the tyres and the road.

Twingos with the turbocharged TCe engine have a variable power-steering system, which feels strange, and as the non-turbo car doesn’t have this feature, it feels more natural and consistent to drive. The suspension set-up on the Twingo makes for a comfortable ride, while the handling is decent enough and doesn’t betray the unusual engine location during normal driving.

On the GT, tweaks to the suspension include stiffer springs and dampers, which have made this version more poised and controlled in corners than the rest of the Twingo range, with reduced body lean. It still doesn’t, however, deliver the precision and accuracy that keen drivers will find in a Skoda Citigo or Kia Picanto. 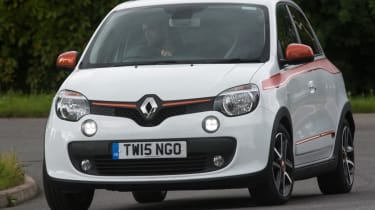 Fans of fast Renaults shouldn’t be misled by Renaultsport’s involvement in developing the Twingo GT – it’s not a car that delivers driving thrills. Buyers will find that the name should really be interpreted in its traditional sense, where Gran Turismo meant a more powerful version capable of effortless high-speed cruising, because the GT is definitely better if you regularly use the motorway.

However, if you’re after a city car that’s also good on out-of-town roads and motorways, then the Volkswagen up!, Skoda Citigo and Kia Picanto trio are still the better choice, thanks to a better ride and quieter cabin.

The Twingo’s agility around town is far more worthy of celebration – its best feature is a very tight turning circle, which makes parking and town driving very easy. There’s no denying the character of its perky three-cylinder engine, which is enjoyable to listen to as its sound bounces off walls and parked cars. 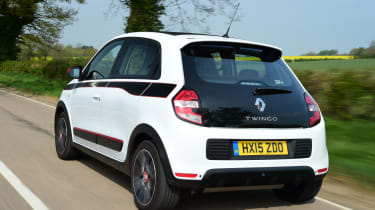