The Renault ZOE has a bigger boot than the Clio

One of the biggest challenges in designing a practical small electric car is accommodating the bulk of the batteries. They have to be stored somewhere, and this usually means compromised boot space or less legroom in the back – and sometimes both. However, by placing the batteries under the seats where you might find the fuel tank in a petrol car, Renault has squeezed a comfortable interior into the ZOE’s compact shape.

The ZOE is based on the structure of the Renault Clio and although it's the same width, it's longer and more than 10cm taller. The battery is stored under the front and rear seats, which are higher up than in the Clio. However, the ZOE’s height serves to maintain reasonable leg and headroom.

As the engine is essentially swapped for an electric motor and charger and the batteries are under the seats, the ZOE’s boot isn't as small as you might think. In fact, at 338 litres, it's about the same size as some bigger family hatchbacks; the new Clio has outgunned it, however, by offering up to 391 litres. However, there is no place to store the car’s charging cables as standard, with a false boot floor storage option only available on the options list. 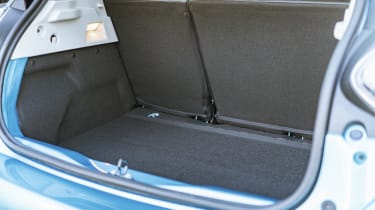 To increase practicality, the ZOE’s rear seats fold down when not in use to increase boot space further but they won’t lie completely flat. You only get a split-folding rear seat on mid-range Iconic trim cars upwards.